I'm not so sure why there is a mystery regarding the 39 kegs of Mexican silver coins. $39,000 in Mexican Silver was delivered to Joseph E. Johnston in April 1865. (One source states it was $37,679.96.) Davis sent it to Johnston for safe keeping, and at one point, even asked for it back. Johnston refused, and instead, paid his men with it. Johnston had been clamoring for weeks for money to pay his troops. According to Maj. G. W. F. Harper of the 58th North Carolina Troops, each man received “one dollar and fourteen cents” in “Mexican silver dollars.” “There being no means of making change for the cents, the men, in groups of seven, drew for the surplus dollar.” 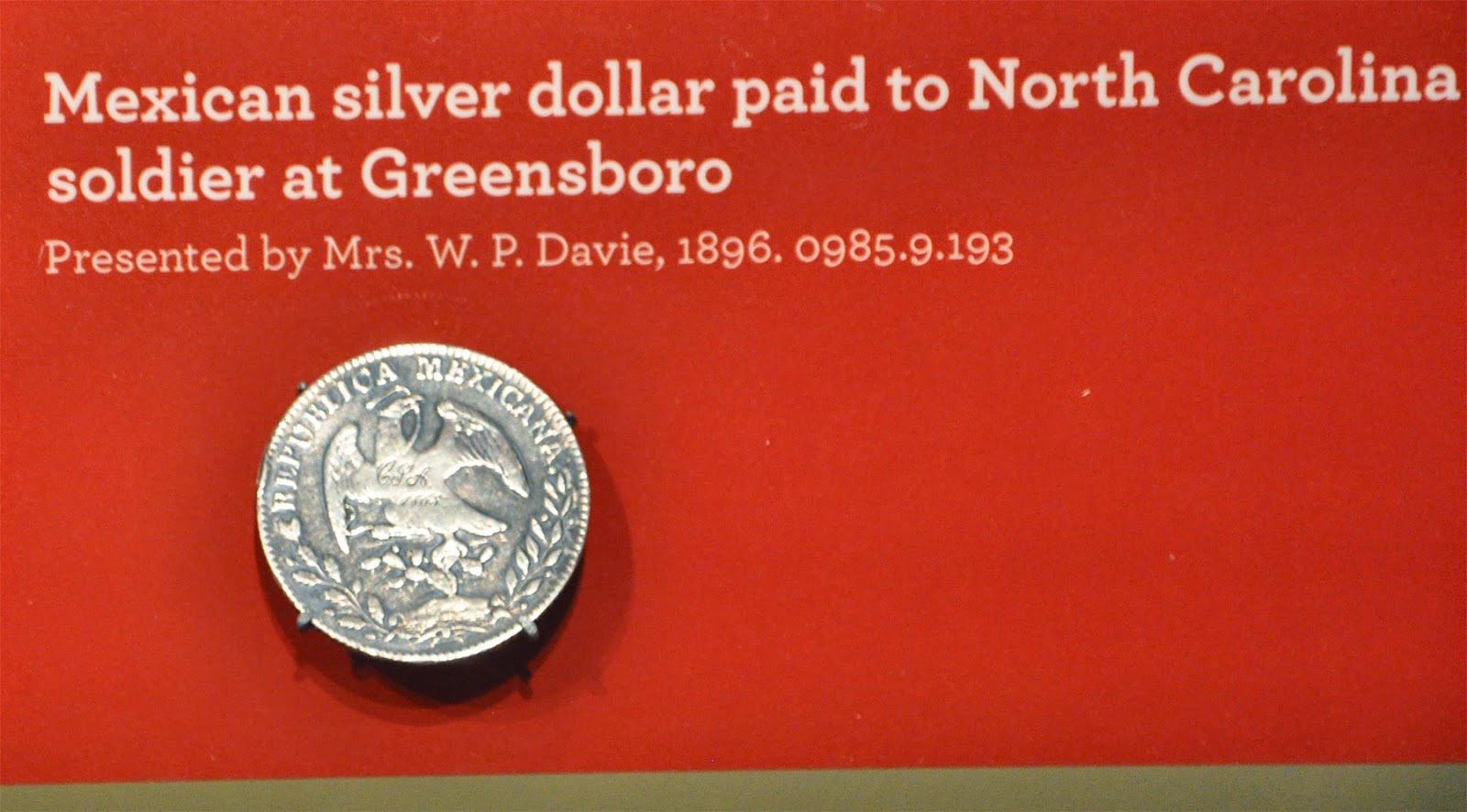 Why was this money not moved to Charlotte and deposited in the old US Mint building with the remaining treasury gold, silver, and notes on April 8? Because the other funds from the Confederacy treasury were taken by rail. Stoneman's men wrecked the railroad around Greensboro on April 11. Transporting 39 kegs of silver would have been too much for Davis and his party to undertake. It was a struggle to come up with enough horses and ambulances/wagons to move the Confederate cabinet.

This leads me to another question: there are plenty of books out there about the lost Confederate gold/treasury. I understand this. Sensationalism sells and who does not love a good buried treasure story?  But is there not a book that looks at the hard, cold facts regarding the final disposition of the very limited funds of the Confederate government? Maybe a future project......

RALEIGH, N.C. -- Union Gen. William T. Sherman and Confederate Gen. Joseph E. Johnston negotiated the largest troop surrender of the Civil War on April 26, 1865, effectively ending the Civil War. Re-enactment of those negotiations at Bennett Place State Historic Site, and other developments from the Civil War including a "Soldier Walk Home" and "Hotel de 'Afrique" lecture, will be presented through June at venues of the N.C. Department of Cultural Resources.

N.C. Museum of Art, Raleigh. April 21. Arms for Art, and Other Shenanigans. Discover the little-known facts behind the bust of Confederate Vice President John J. Calhoun in the NCMA collection at a lecture by Curator of Modern Art John Coffey. The bust was at the center of an extraordinary conspiracy in 1861 as North Carolina prepared to join the Confederacy. 6:30 p.m. $50 non-members, $45 members.

Mountain Gateway Museum, Old Fort. April 25. Pioneer Day. An encampment of Civil War interpreters and a display of the 58th Regiment North Carolina Troops battle flag will be featured at this annual festival celebrating the heritage of the North Carolina Mountains. 9 a.m. Free.

Museum of the Albemarle, Elizabeth City. May 2. After Appomattox: North Carolina Civil War Monuments, 1865-1965. An exhibit focusing on the monuments across the state that commemorates the Civil War. In the century following the Confederacy's demise, North Carolinians memorialized the Union and Confederate dead in cemeteries and courthouse lawns throughout the Old North State. Some towns, such as Hertford, even had monuments to both sides. North Carolina photographer and author Douglas Butler spent five years documenting the state's 109 Civil War monuments.

N.C. Museum of History, Raleigh. May 6. History Corner: Civil War Kids. Program for ages 6-9 with parent. Learn what it was like to have battles in your backyard, and what life was like during and just after the Civil War. 10 a.m. Register at NCMOH-programs.com. $3 plus tax per child/$1 plus tax for museum members.

N.C. Museum of History, Raleigh. May 6. History Hunters: War's End? Program for ages 10-13. Learn what the end of the Civil War meant in North Carolina, and how freedom changed the lives of the formerly enslaved as well as former owners. 11:15 a.m. Register at NCMOH-programs.com. $3 plus tax per child/$1 plus tax for members.

State Capitol, Raleigh. May 9. Raleigh Occupied. A Civil War era troop encampment on the Union Square lawn and character interpretations that will recall the occupation of the State Capitol by troops of Union General William T. Sherman.10 a.m. Free.

Museum of the Cape Fear, Fayetteville. May 9. Civil War Bands. Dr. Robert Downing, founder of the Regiment Band, 11th N.C. Troops, will give a presentation on the history and the purpose of Civil War bands. Original and reproduction Civil War-era instruments will also be on display. 2 p.m. Free.

Duke Homestead, Durham. May 11-23. Soldier Walk Home. A Civil War re-enactor makes a walk from New Bern to Durham, following a route much like Duke tobacco magnate Washington Duke made at the end of the Civil War. Stops in communities along the way will celebrate local history. A tribute to all soldiers returning home from war and a celebration of reunification.
Graveyard of the Atlantic Museum, Hatteras. Civil War on Hatteras Island. Author and historian Drew Pullen shares the fascinating story of the war on Hatteras Island, lending colorful insight to the island's memorable history. 2:30 p.m. Free.

Somerset Place, Creswell. May 16. Music and Literature of the Civil War. Take a glimpse into the war time experiences of Somerset Plantation residents and learn what they encountered in their own words. Costumed interpreters will share true stories adapted from letters. Visitors will encounter the characters on a walking tour. Music historian Simon Spaulding will perform Civil War music and soldier songs. 11 a.m. Adults $6.41/Under 12 $3.20/Friends $5.12, tax included.

Duke Homestead, Durham. May 23. Bull Fest. In addition to traditional fun, there will be a focus on doing without in 1865. Re-enactor Philip Brown arrives after walking from New Bern in a route similar to that of Washington Duke as he returned home from the Civil War. Brown will arrive in Durham on May 22 and have a welcome program before journeying to Duke Homestead to a welcome home celebration of substitutions at a time of doing without. 11 a.m. Free.

Historic Stagville, Durham. May 30. Freedom 150. A 150th Civil War commemoration examining the effects of the war on African Americans in the South as the war ended. The joys and uncertainties of the newly freed will be examined as historic interpreters present happenings at and around Stagville Plantation. Children's activities, hikes through Horton Grove Nature Preserve led by the Triangle Land Conservancy, other demonstrations, and historian Joseph McGill will discuss his work in raising awareness of preservation of slave cabins. 10 a.m. Free.

For additional information call (919) 807-7389 or visit ncculture.com/civilwar. The Divisions of State Historic Sites, History Museums and Art Museums are within the N.C. Department of Cultural Resources.
Posted by Michael Hardy at 11:52 AM No comments:

Last Meeting of the Confederate Government

Over the past couple of weeks, as I have been out speaking about the various Confederate capitals, the question frequently arises about other sites in South Carolina and Georgia. It is my argument that once Jefferson Davis rode out of Charlotte, the Confederate government ceased to exist. The final important decision made by Jefferson Davis and the Confederate Cabinet was to accept the terms worked out by Joe Johnston and William T. Sherman. 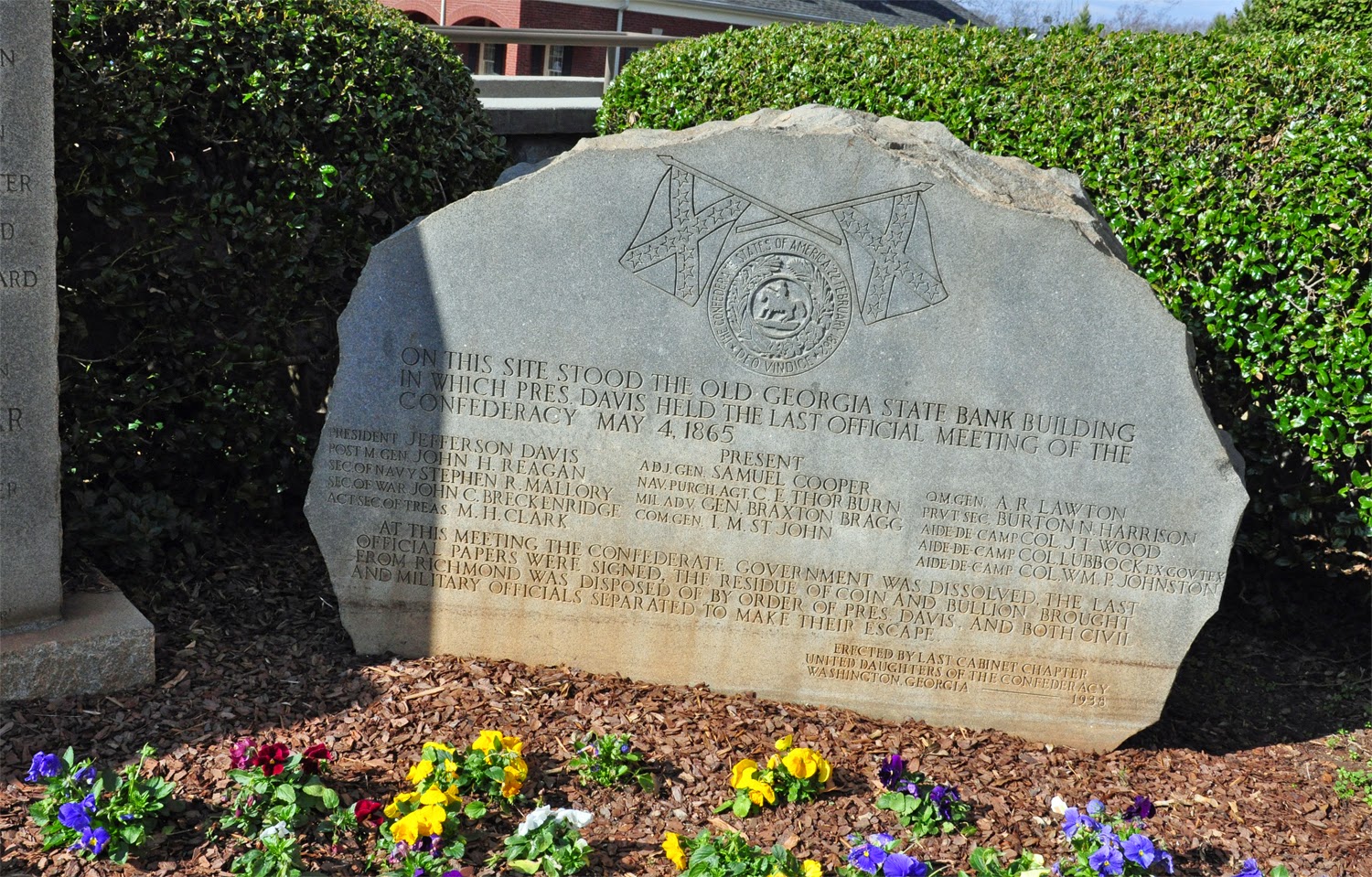 I want to look specifically at the monument in Washington, Georgia, dedicated in 1938. On that monument is a list of names of men present, meeting with Davis, when Davis dissolved the Confederate government. I mean no disrespect to my family and friends in Georgia, but not everyone carved on this monument was present at the Washington meeting.

This meeting took place on May 4, 1865. Breckenridge and Reagan were still at the Savannah River, paying off the Confederate Cavalry escort. Also with Breckenridge and Reagan were Micajah Clark, A. R. Lawton, Isaac M. St. John. Reagan would not catch up to Davis until after Davis had left Washington. Breckenridge never rejoined Davis. William C. Davis's biography of Breckenridge also hints that Bragg was with Breckinridge at this time. However, McWhineny and Hallock, in Braxton Bragg and Confederate Defeat, write that Bragg was with Davis in Washington, leaving the president's party the next day.

Clint Johnson writes in Pursuit: The Chase, Capture, Persecution and Surprising Release of Jefferson Davis, that Mallory left before the meeting was called, joining with Brig. Gen. Louis T. Wigfall, and heading toward Atlanta.

Samuel Cooper, also on the monument as having been at the meeting on May 4 in Washington, Georgia, never left Charlotte. Cooper received his parole in the Queen City.

So of the above list, we know that Davis was there, maybe Bragg, and Thorton, Harrison, Wood, Lubbock, and Johnston. This is a far cry from the fourteen listed above.
Posted by Michael Hardy at 10:48 AM No comments:

My next "Stump the historian question" came this past Saturday at the Bennett Place State Historic Site. A gentleman from the audience wanted to know where Confederate Lt. Gen. Daniel Harvey Hill was during the surrender negotiations between Johnston and Sherman at the Bennett Place.

First, I turned to Hal Bridges's biography of D. H. Hill, but found nothing. Next I looked at Mark Bradley's This Astounding Close: The Road to the Bennett Place. 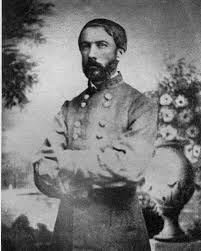 We know that Hill spent a lot of late-1864 sitting out the war at his home in Charlotte. On Jan. 21, 1865, he assumed command of the District of Georgia and in the Department of South Carolina, Georgia, and Florida. In February, he rejoined the Army of Tennessee. Bradley writes that Hill was in Smithfield on March 22, 1865. D. H. Hill was a guest of William Hardee on April 4, at Hardee's grand review. Robert Dunkerly writes in The Confederate Surrender at Greensboro that this review took place at the Stevens house, near Selma. After these accounts, Hill seems to disappear from both Bradley’s and Dunkerly's accounts.

Next, I went to the official records, but I only found mentions of the General, with nothing about where he personally was during the time frame of the Bennett Place negotiations. Next I browsed through Hill's Compiled Service Record from the National Archives. There are 117 items in his folder, and I will admit that I did not read every page, but I saw nothing pinning him down after April 4, 1865.

Also, I tried to look through various newspapers online, but turned up nothing.

The only other entry is in July 1865, when Hill wrote to US President Andrew Johnson, concerning his presidential pardon. This letter was written from Davidson College.

So for now, I am still stumped about just where Hill was between April 4, 1865, and May 1, 1865, when he was paroled in Greensboro. Maybe someone else knows of Hill's whereabouts.
Posted by Michael Hardy at 1:08 PM 1 comment: 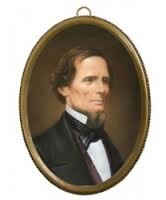 In last night's question session after my lecture, someone asked about Jefferson Davis and when (or if) he ever got his citizenship restored. I could remember that it was US President Jimmie Carter who restored Robert E. Lee's citizenship, but I could not recall the fate of Jefferson Davis. Come to find out, it was Jimmie Carter who, in October 17, 1978, also restored "the full rights of citizenship to Jefferson Davis."  This was two years after Carter had done the same for Lee. So now we know, and maybe next time, I'll remember.
Posted by Michael Hardy at 5:20 PM 1 comment: