Zeb Vance: from Unionist to Secessionist 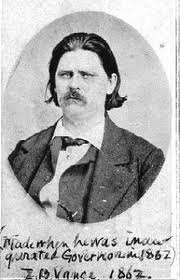 Most of us have heard the Vance anecdote - about how he was in the process of delivering a speech for the Union when word arrived of the firing on of Fort Sumter. Vance stated that he was "canvassing for the Union with all my strength; I was addressing a large and excited crowd, large numbers of whom were armed, and literally had my hand extended upward pleading for peace and the Union of our Fathers, when the telegraphic news was announced of the firing on Sumter and the President's call for75,000 volunteers. When my hand came down from this impassioned gesticulation, it fell slowly and sadly by the side of a Secessionist. " (Dowd, Life of Vance, 441-442.)

This supposedly took place in Madison County, or, according to Tucker, in Bakersville in Mitchell County.

Yet I have found another version of Vance's change from a Unionist to a Secessionist.  An article written by "T. D.," in The Daily Confederate (April 12, 1864) states, "why did [Governor Vance] take it in one night in Asheville; having retired to bed a warm Union man, for he had said so in a strong speech that day--he awoke the next morning a 'fizzing hot secessionist.'"

The first account was written many years afte
r the war. The second, while the battles still raged. What version do you think is correct?
Posted by Michael Hardy at 2:51 PM 1 comment:

George N. Folk and the raid at Fish Springs.

We tend to write and talk a lot about Tar Heel regiments in the Army of Northern Virginia. And rightfully so. That is where the bulk of North Carolina soldiers served. I am "guilty" of this myself, having written a regimental history of an ANV regiment, a history of a Virginia battle, and an ANV brigade history as well, along with several articles.

There are, however, many exploits to be explored concerning Tar Heel soldiers outside the ANV and Virginia theater of the war. Here is one.

George N. Folk was a Watauga County lawyer and representative in the General Assembly when the war started. In early 1861, he resigned his seat in Raleigh, and spent some time in Asheville before returning to Boone and raising a company for Confederate service. The Watauga Rangers became Company D, 1st North Carolina Cavalry in August 1861. Folk resigned on May 9, 1862. On September 12, 1862, Folk was appointed lieutenant colonel of the 7th Battalion, North Carolina Cavalry. The 7th battalion was composed of seven companies, including two from Johnson County, Tennessee.

On September 26, 1862, Folk was ordered to move from the Asheville area, with three companies, into Johnson County, Tennessee. Folk's orders read in part: "a body of disloyal men who are reported by the Governor of North Carolina to have escaped from that State and are believed to be organizing in the vicinity of Stone Mountain for the purpose of resisting the authorities of the Confederate States and joining the enemy in Kentucky. Should you succeed in capturing them they will be sent under your guard to Salisbury, N.C., and turned over to the provost-marshal at that place."

Due to the ongoing unrest in eastern Tennessee, various Confederate regiments were sent into the area from time to time in an attempt to curb the violence, and to shut down the routes used by those coming from North Carolina, headed toward Union lines in Kentucky. In September 1862, Lt. Col. George N. Folk, commanding the 7th Battalion, North Carolina Cavalry, moved three companies from Asheville, into Johnson and Carter Counties. His orders were to capture or disperse "a body of disloyal men" from North Carolina, who were said to be organizing themselves into a group to resist "the authorities of the Confederate States and joining the enemy in Kentucky." Captured North Carolinians were to be sent to Salisbury, while Tennesseans were sent to Knoxville.

Chief on the most-wanted list was a Jos. Taylor, reportedly a captain in the 2nd East Tennessee Cavalry. According to one story, Taylor had been captured, escaped, and made his way into east Tennessee. He was preparing to take others into Kentucky. However, there does not appear to be a Captain Taylor in the cavalry from Tennessee. William Penland, a member of the 7th Battalion North Carolina Cavalry, wrote in January 1863 that Taylor had collected 70 men, and for some time had "been capturing soldiers, stealing and plundering from the citizens in the counties of Carter and Johnson." This was just the type of rogue that Folk was sent to find. On January 23, Folk was out patrolling along the Watauga River with about 40 of his men. Folk spied the members of Taylor's group on the other side of a river. He ordered his cavalry to swim across. When Taylor's men saw they were being surrounded, they abandoned their camp and moved further up the mountain, positioning themselves on a bluff. As Folk moved in, Taylor's command opened fire.   Thomas Newman, a private under Folk's command, was struck and killed. It is possible that another private, David Wagner, was also killed in the skirmish.

As Folk's men dismounted and started up the hill, the bushwhackers fled. Taylor was spotted, shot, and killed on sight. Samuel Tatum was also shot while trying to escape, although one account states he feigned death and survived the war. Three others were captured. Two of them, George W. Kite and Alexander Dugger, were quickly tried, found guilty, and hanged on the spot, while a fifth man, just a youth, was sent to Knoxville. There were undoubtedly others who escaped, and several of Folk's men reported that shots came close enough to produce holes in their clothing. It would have been better for Folk to have sent all the guilty parties back to Knoxville. Folk and several others were indicted after the war for murder. However, Unionists sent to Knoxville had a way of being set free by the authorities, and the depredations committed by Taylor seemed greatly to allow him a chance of immunity.

Posted by Michael Hardy at 6:54 PM No comments:

A couple of folks have messaged my lately wondering "what's next?". So, here is what I've been working on since turning in the Branch-Lane manuscript. 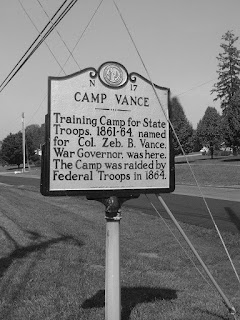 George W. Kirk is the ribbon that will run through the text. But, he is just one of many cast members on a stage of unequal bloodletting in the 1860s in the mountain counties of North Carolina and Eastern Tennessee. There were no winners in this war.

I've already approached  the History Press about publishing this book, and they have agreed. I'm looking forward to sharing with you more of my findings, and frustrations, as I tackle this new project.
Posted by Michael Hardy at 10:50 PM 3 comments: