For the past couple of weeks, I've been working on the Chancellorsville chapter of the Branch-Lane book. In all the accounts that I have read, this one question keeps bothering me: why Pender? 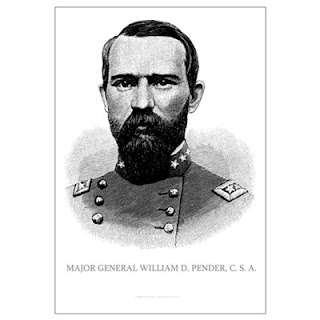 Once Jackson is wounded (by the 18th NCT, of Lane's brigade), General A. P. Hill sends out Capt. Benjamin W. Leigh, an aide-de-camp, to find an ambulance and a surgeon. Leigh returns with Dr. Richard R. Barr, assistant surgeon, 34th North Carolina Troops, a part of Pender's brigade. Now, I understand how difficult it would have been for Leigh to find someone - it was dark, the woods thick (in places), confusion reigned supreme. Given the events, I imagine that finding someone was a chore, although Leigh seems to find Barr quickly. But, was there no surgeon or assistant in Lane's brigade, or Heth's brigade behind them? Pender's brigade was even further back.

And that leads me to my second “Why Pender?” question: Lane writes to A. C. Hamlin in 1892: "Genl. Pender rode into the woods, calling for me. When we met he advised me not to advance, as Genl. Jackson had been wounded, & he thought by my command." If the map in Sear's Chancellorsville is correct, how does Pender know? Heth's brigade is stacked in front of him on the Orange Plank Road. Does Leigh run into Pender looking for a surgeon? Once again, Leigh has to pass through Lane's lines, through Heth's brigade stacked on the road, just to find Pender and his brigade.

I looked at Willis'a biography on Pender. He, and several other sources, have not only Doctor Barr on hand quickly, but General Pender as well. Was Barr following Pender, kind of like a staff officer? Willis writes:  "A staffer sent by Hill to locate a doctor stumbled into Dorsey Pender as he came forward to make his own assessment of what had happened" (207-8). I also looked through Pender's letters, but he makes no mention of the encounter.

Thoughts?
Posted by Michael Hardy at 1:12 PM No comments: