When I wrote the chapter on brigade medical care for General Lee’s Immortals, I relied upon five  books (secondary sources) to provide the background for that chapter. Those five were Cunningham’s Doctors in Gray (1958); Humphrey’s Marrow of Tragedy (2013): Schroeder-Lein’s The Encyclopedia of Civil War Medicine (2008); Calcutt’s Richmond’s Wartime Hospitals (2005); and, Green’s Chimborazo: The Confederacy’s Largest Hospital (2004). That’s not to say there are not other texts that I have that were influential. There are others, like biographies on Kate Cummings, Dr. Mary Walker, and Doctors in Blue. But those five, along with the primary sources gleaned from the writings of members of the Branch-Lane brigade, allowed me to craft a really good chapter that has gotten some attention. 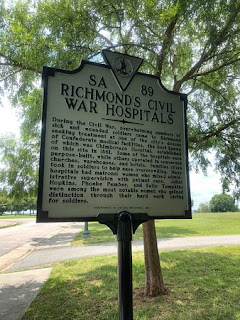 In the upcoming Feeding the Army of Northern Virginia project, I set out to have a chapter on foodstuff connected to the hospitals that served Robert E. Lee’s army. As I did with the chapter on brigade medical care in General Lee’s Immortals, I want to push our understanding of this aspect of Confederate military history. So it is time to grow my library once again, both with primary sources and secondary literature.

I started with Frank Freemon’s Microbes and Minie Balls: An Annotated Bibliography of Civil War Medicine (1993). This book is divided into two sections. The first covers articles and books written by people (mostly) connected to the medical department. Of course, since I write primarily Confederate history, I took note of several Confederate texts that bear further exploration. At the same time, there were several secondary texts that I would also like to examine. These include: Alfred Bollet “Scurvy, Spruce, and Starvation: Major Nutritional Deficiency Syndromes During the Civil War” Medical Times (November 1989); Frank Freemon  “Administration of the Medical Department of the Confederate States Army, 1861 to 1865.” Southern Medical Journal (1987); Harris Riley, Jr., “General Robert E. Lee: His Medical Profile.” Virginia Medical Monthly (1987); and John Stevens “Hostages to Hunger: Nutritional Night Blindness in Confederate Armies.” Tennessee Historical Quarterly (1989).

Three other books I have recently added to my ever-growing library include Frank Freemon’s Gangrene and Glory: Medical Care during the American Civil War (1998); Ira Rutkow’s Bleeding Blue and Gray: Civil War Surgery and the Evolution of American Medicine (2005); and Shauna Devine’s Learning from the Wounded: The Civil War and the Rise of American Medical Science (2014). I’m not sure any of these will lead to information on my narrow topic, but, overall, I hope to gain an even greater understanding of medical practices during the war.

Coming next, we’ll look at primary sources dealing with the Army of Northern Virginia and Confederate hospitals.

Do you have a favorite medical resource? Care to share?

Posted by Michael Hardy at 3:49 PM No comments: