The sad, cruel fate of war, or, the war-time life of Tod R. Caldwell.

Gentlemen: Your polite and kind invitation to attend and address a public meeting of the citizens of Wake County, proposed to be held this day in the City of Raleigh for the purpose of giving expression to our feelings on the occasion of our restoration to the Union and to the protection of the flag of our common county, has been received, and I must cordially thank you for the compliment. I deeply regret, however, my inability to be present, as I am compelled to hasten to my home in the west on important business which cannot be postponed. I shall nevertheless be present with you in sentiment and in sympathy and no one of the many spectators who will attend the meeting will hail with more delight that I do, the advent of peace and the deliverance of our people from the iron rule of tyranny and oppression. Let us all, then, with one accord, as good and loyal citizens, respect, and reverence, the glorious stars and stripes which are emblazoned upon our country's banner.
Let us cherish it as our benefactor and deliverer from a worse than Egyptian bondage, and as a protector from insult and injury, both at home and abroad; let us return to our peaceful avocations determined to cultivate feelings of amity and brother's love toward the people of all sections of our country-to stand to and faithfully abide by the Union, the Constitution and the laws; and to stamp forever with the seal of our disapprobation, the miserable hearsay of secession, which has been the prolific source of so much distress and suffering to a once happy and prosperous people.

While Caldwell might have kept a low profile in the foothills of the Blue Ridge Mountains during the war years, the war came to his home as well. Caldwell had a son, John, who pleaded with his father for permission to join the army. Tod Caldwell finally consented, and John Caldwell enlisted in Company E, 33rd North Carolina Troops, on May 3, 1863. The younger Caldwell was just eighteen years old. He would serve a little less than two months in the Confederate army.

There are two stories regarding his death at Gettysburg. One takes place on the afternoon of July 2 on a picket line near Long Lane, or out in front of it. The other account has Caldwell dying on July 3 as Lane's brigade neared the Emmittsburg Road. There were several newspaper accounts of the death of John Caldwell published after the war. In one of those accounts, when the Governor was told of the events of the death of his son, "the Governor locked himself in his room and was all day in tears. He never told his wife" of the details "and told it only to his private secretary."

So as Caldwell sat in Raleigh, getting ready to head back to Burke County for "important business," he too well understood the "distress and suffering" of the war. His own family had been split, and his son, just 18 years old, was killed in the heat of battle in distant Pennsylvania.

Posted by Michael Hardy at 8:54 PM No comments:

Flip open John G. Barrett's The Civil War in North Carolina and you will find just one reference, per the index, to Tod R. Caldwell. Barrett quotes Caldwell in a March 1864 letter to Gov. Zebulon B. Vance, complaining about "men professing to be impressing agents from Longstreet's army and elsewhere are getting to be as thick in this community [Burke] as leaves in Vallambrosa." Caldwell adds that scarcely a week goes by without a new and hungrier group. (240-41)
Who was Tod R. Caldwell? The short answer would be that Caldwell was the 1st lieutenant governor of the state of North Carolina, and upon the impeachment W. W. Holden in July 1871, became the 41st Governor of North Carolina.

Caldwell was born in Morganton in February 1918. In 1840, he graduated from the University of North Carolina, and studied law under David L. Swain. He was admitted to practice law before the Superior Court in 1841.  Caldwell served in the House 1842-1846, and in 1850, represented Burke County in the state senate. 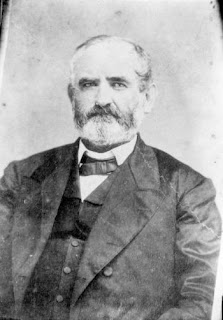 In pre-war politics, Caldwell was a Whig and opposed the movement to take the state out of the Union, lobbying hard for the Conservative Union party. In June 1860, the Weekly Raleigh Register reported that Caldwell spoke at a meeting in Morganton advocating the nomination of Bell and Everatt, Constitutional Unionist, for president and vice-president of the United States. In September 1860, he wrote: "Trusting that every friend of our beloved country, and every foe of Black Republicanism, Disunionism and Secession, will rally as one man around the National standard of Bell and Everett, with the war cry of "Death to Sectionalism" on their lips, I take my stand ready to do duty among the honest rank and file of the country, who alone are its real defenders in times of danger...."

Once North Carolina left the Union, Caldwell had a choice to make. It appears that he was nominated as the Presidential Elector for the 9th district in October 1861. After this nomination, Caldwell largely disappears from the public record during the war years. There is one account in the Raleigh Weekly Progress, May 10, 1864, in which W. W. Avery and Caldwell got into a debate about who would win the Confederate Congressional district: Leach or Foster.

It was probably at the same time that Caldwell attended a rally in Morganton in which W. W. Avery nominated Zebulon Vance for re-election as governor of North Carolina. After several speakers, Caldwell asked to address the crowd, "and so thoroughly exposed these Vance leaders and Confederate officer-holders, that Mr. Avery himself was forced to come to the rescue." After Avery spoke for half an hour, Caldwell "then took him in hand and trimmed him in good style, especially in relation to his activity in bringing on the war and then in being so successful in keeping himself out of it. He also told him that two years ago he and his party were denouncing Gov. Vance in the most unmeasured terms, but now--all at once--he had a marvelously proper man, and was their first choice for Governor."

For the most part, it seems that Caldwell lay low during the war years. In his application for presidential pardon, penned in Burke County on July 25, 1865, he wrote that he was "opposed to the late Rebellion from its inception to its termination, but that, to avoid levies in the armies of the so-called "Confederate States," he accepted the officer of Solicitor for the county of Rutherford.... Your Petitioner would add that he canvassed his section of the state and opposed, upon the hirelings, the doctrine of secession and disunion to the best of his ability, and exacted every effort to prevent the call of the State  Convention which passed the ordinance of Secession; -that, during the existence of the said Rebellion, he actively opposed the David Usurpation -- indeed, so much so, that he was threatened by the Rebel leaders with the destruction of private property and personal violence." Caldwell was pardoned on August 14, 1865.

Caldwell's pronounced Unionism soon propelled his political prospects. Not only did he become president of the Western North Carolina Railroad, Caldwell became an aid to Governor Holden in July 1865.  He  represented Burke County in the Constitutional Convention In October 1865. He was recommended as a candidate for the US House in November 1865. 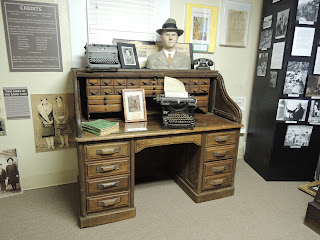 Caldwell went on to become the first lieutenant governor of the state of North Carolina. When Holden was impeached in 1871, Caldwell ran for governor in 1872 and barely won by a margin of 2,000 votes. While in office, he fell ill of a gall bladder attack, and died on July 10, 1874.

So why my interest in Caldwell? At the Avery Museum, we have a desk that belonged to the governor.
Posted by Michael Hardy at 10:13 PM No comments: