Review: Flora and Fauna of the Civil War.

One thing is for certain when dealing with literature of the 1860s: it's as deep as it is broad. Ever since the war ended, veterans, historians, amateurs, and academics have been exploring every angle of the times. (That's especially true during the past thirty or so years, the "Golden Age of Civil War publishing, as my publisher Ted Savas calls it.) Yet writers and scholars continue to find new ways to investigate the time period. 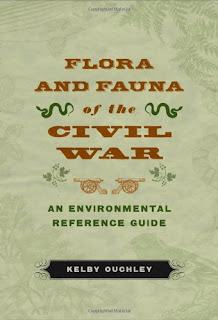 A year ago, I ordered Kelby Ouchley's Flora and Fauna of the Civil War: An Environmental Reference Guide (LSU, 2010). Many of you know of our interest in native plants here in Southern Appalachia. While our interest has centered on the late 18th century, we're hopeful that one day we will get to expand into the mid-19th century with living history and interpretive programs. So there was that angle for our interest in the book. At the same time, I've been working on the Feeding the Army of Northern Virginia project, so there is another angle.

Ouchley's guide is a part of the emerging field of examining the environment and the War. How did the environment affect combat operations? How about the transportation of supplies? How did the war affect the environment the soldiers passed through? (Think of the unexploded ordnance at Gettysburg or the trenches that cut through the farmers’ fields below Petersburg.) After an introductory chapter  and a chapter placing the subject in the "Civil War" setting, Ochley tackles flora first. He examines trees, like Ash, Dogwood, Elm, and Willow, providing some scientific background on the way that people used them during the war. For example: "A tonic made from shredded ash bark was used as an astringent, diuretic, and to treat arthritis, fever sores, and constipation." (19) Besides trees, Ouchley also looks at herbs, blackberries, grapes, and Mulberry. The next section focuses on fauna: alligators, bats, fish, honeybees, turtles, etc. After each entry, there are several excerpts from the letters or diaries of soldiers who reference the plants and animals Ouchley is referring to.

My only real complaint are these references. There are plenty of Federal examples, but most of his Confederate sources come from the Army of Tennessee, or from soldiers stationed along the Mississippi River. There are plenty of Army of Northern Virginia accounts out there. It would have been nice to see a few more of those included. (Ouchley did cite from the Stilwell Letters [53rd GA], and from Col. William H. A. Speer [28th NC], two excellent sources.) In Ouchley's defense, his editor might have curtailed some of his examples. Publishers are known to do that.

Overall, Ouchley's Flora and Fauna of the Civil War is an interesting read that adds just one title to a interesting and developing sub-genre in Civil War literature.

Posted by Michael Hardy at 11:22 AM No comments:

Black Camp Servants as foragers in the Army of Northern Virginia

That's a big-sounding title for a post on my long-running blog, don't you think? When I submitted my proposal to Savas Beatie for "Feeding the Army of Northern Virginia," I included an appendix on the role of African-Americans in camp. I'm still hopeful that I can gather enough material to turn this into a whole chapter.  Overall, the historiography seems to be slim on the subject (if I am missing something, please drop me a line and let me know).  Even Glatthar's General Lee's Army only hints at the role of camp servants in relationship to food, devoting a small chapter to "Blacks and the Army."

An early-war portrait goes like this: every Confederate soldier who arrived in camp carried a shotgun, wielded a bowie knife, and had a manservant to facilitate his every need. That was, of course, far from the truth. The majority of Southerners did not own slaves, and an even fewer percentage of men who were serving in the army owned slaves. While the Confederate army apparently never kept a count of camp servants, there were probably thousands of them.

Many, especially in the officer's corps, considered a camp servant as an essential element.  Being an officer taxed the limits of many men. They were taking care of the wants and needs of one hundred men, while also trying to learn their own positions. There was little time to attend to their own wants and needs. This was especially true when it came to food, and more than just food, the acquisition of foodstuffs. Captain Ujanirtus Allen (21st Georgia Infantry) wrote home in August 1862, "The fact is I have lived very hard for several months. If I had one [servant] he could get many things in the country." (1) Captain John M. Vermillion (48th Virginia Infantry) echoed Allen: "We need a great many things in camp we haven't got... I would like very much to have a servant to look up provisions and cook for me..."(2)

Many of the servants did just that: they roamed the countryside looking for items to supplement the cook pot. At times they made it back home. Jed Hotchkiss, of Stonewall Jackson's staff, wrote in April 1863 that his servant William had just returned from home, bearing a box of provisions. (3) Robert E. Lee wrote in the latter half of the war of several times when his mess steward, Bryan, made trips from Richmond to Orange Court House or from Petersburg to Richmond. (4) William Dorsey Pender, then colonel of the 6th North Carolina State Troops, wrote to his family that when Harris came to the army, he wanted him to bring a box of sweet potatoes. (5) Camp servants, since they were not officially Confederate soldiers, could come and go. They had an enormous sense of mobility. Their masters, or employers, simply wrote them out a pass and sent them on their way. A soldier had to have a pass signed by numerous higher-ups. Only so many were granted at a time for the soldiers. Often, these camp servants were sent away with money to buy provisions. They held a certain level of trust for those who owned or employed them.

Some men brought slaves from home to serve as cooks. Others hired slaves or free men of color and brought them from home, while a third group hired slaves or free men of color from the surrounding neighborhoods where they were stationed. Col. James K. Edmondson, 27th Virginia Infantry, wrote home in November 1861 of a servant he had hired: "I presume you did not know that I had gotten a servant. I sent a requisition to Lexington before I left Centreville for a free boy to cook for me..." (6)

Edmondson goes on to describe his living arrangements. While we might assume that the three or four camp servants might room and board together, not so witht Edmondson: "...I have gotten myself one of these little straight up and down tents, just large enough for myself and servant to stay in--his bed is on one side and mine on the other and in the middle I have a large oven of hot coals which keeps the tent very comfortable..." (7)

Unless I am missing something, no one has ever really explored this topic. Jamie Amanda Martinez in Confederate Slave Impressment in the Upper South, focuses on enslaved peoples who were hired or impressed to work in Government facilities or on fortifications. Glatthaar, in General Lee's Army, focuses on "Blacks and the Army" (his chapter heading), instead of Blacks in the Army.  (Confession: I've not read Woodward's Marching Masters yet.) Even James E. Brewer, who wrote The Confederate Negro: Virginia's Craftsmen and Military Laborers, 1861-1865, devotes little space to the role of camp servants. Brewer laments the loss of the records of the Commissary General of Subsistence Office, devoured by the fire of April 2-3, 1865. But even Brewer was more focused on the Confederate government's use of Black Americans, and less on the soldiers/servants in the field. Maybe, in time, we can flesh out more of this story.

Posted by Michael Hardy at 7:53 PM No comments: