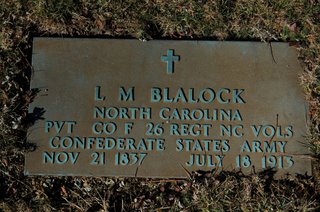 It amazes me sometimes the way we can distort history. Today, I went up to the Montezuma Community Cemetery here in Avery County, to take a picture of the grave of William M. "Keith" Blalock for a local history project that I am trying to wrap up. I am sure I have pictures of his gravestone here someplace, but it was easier to go by the cemetery when I took off my trash. Blalock’s stone reads "L. M. Blalock.... PVT Co. F 26 REG. NC VOLS CONFEDERATE STATES ARMY" I have no idea who put up the marker.

First, his name was not "L. M." but William McKeeson. It is true that he served as a private in Company F, 26th North Carolina Troops. And, he was honorably discharged, after having rolled around naked in every type of poisonous plant that he could find. After Blalock returned back to the mountains of western North Carolina, he started guiding escaped prisoners from Salisbury and other dissidents over the mountains and into east Tennessee where they met with Dan Ellis who continued the trip to Kentucky. He also used the war as an excuse to exact revenge on family members and other local citizens. Finally, he did join the Union Army near the end of the war (10th Michigan Cavalry). One thing is for certain, he had total disdain for the Confederacy. Yet at some point, someone chose to put a military marker on his grave, commemorating his two or three months in Confederate service.

His wife, Malinda, is interred beside him. She also served as a private, under the name of Sam, in Company F, 26th North Carolina. I wonder why no one chose to honor her service? She served just as long as Keith did.
Posted by Michael Hardy at 6:33 PM No comments: 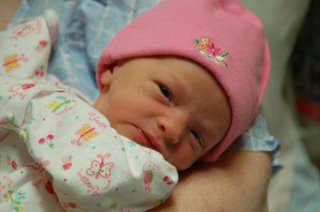 Elizabeth and I are happy to announce the birth of our daughter, Isabella Laine Hardy. She was born on December 20, at 8:27 pm. She is a beautiful little lady who has made our Christmas very special. Everyone is doing fine and everyone is at home.

Needless to say, I’ve not had much of a chance to write about the war (or anything else for that matter) and it will be a few days before we all adjust and get back to some type of normal.

I hope everyone has a Merry Christmas!
Posted by Michael Hardy at 2:56 PM 6 comments:

Being an avid reader and book collector, I tend to go through a lot of books. It doesn’t help any that I write book reviews for two different publications. Every once in a while, I have problems finding things that I need that I’m sure that I’ve read somewhere.

For the past three days, I’ve been on the hunt for something I am being to think that I’ve made up. I’ve been trying to wrap up a local history project about Avery County - the youngest county in North Carolina. There is a community in Avery called Linville - a famous resort community. I thought I had read that some member of the Wedgewood company (yes the pottery Wedgewood Company) came to Linville and mined kaolin (clay) for use in their pottery. But now, I can’t seem to find that reference. I know that kaolin was mined in Linville, and I know that Wedgewood used clay from other parts of western North Carolina, but I can’t seem to get the two linked up.

This is not the first time that this has happened. Often, you will read something, and decide that you don’t need it, only to really need it later on in the manuscript. Then the hunt is on to find it again.

Congratulations to Eric Wittenburg on the publication of his book on the 6th Pennsylvania Cavalry - I am looking forward to getting a copy soon.

Speaking of regimental histories, the topic of my last post, which regiments (North or South) would you like to see get their own histories? No, I’m not fishing for more projects. I’ve got a list of regiments that I would like to write about that will take many years (if ever) to complete. It took me seven years to research and write my history of the 37th NCT, and I’ve been collecting information on the 58th NCT for just as long, so putting together good regimental histories is not something that can be done in a matter of months. I’m just intrigued to know which areas of scholarship have the greatest interest.

So, which regiments would you like to see histories of?
Posted by Michael Hardy at 11:33 AM 2 comments:

This past Friday, I was doing a book signing at Books-a-Million in Asheville, and had the pleasure of meeting Fred L. Ray, author of Shock Troops of the Confederacy. We talked for quite a while, and I am really excited about his work in this neglected area.

Speaking of neglected areas, I often lament the lack of modern regimental histories in the former Confederacy, and in North Carolina particularly. Excluding the works written by the veterans themselves, very few authors have taken up the task of chronicling the story of the regiments that served from the Tar Heel state. I did a little research and here is what I found.

I guess the first modern treatment of a North Carolina regiment was The Bloody Sixth: the Sixth North Carolina Regiment, Confederate States of America by Richard W. Iobst and Louis H. Manarin, published in 1965.

We had two come along in 1998: More Terrible than Victory: North Carolina's Bloody Bethel Regiment, 1861-1865 by Craig S. Chapman and To Drive the Enemy from Southern Soil: The Letters of Col. Francis Marion and the History of the 30th North Carolina Troops, by Michael W. Taylor.

And finally, this past year we saw the release of a history of the 55th North Carolina by Jeffrey M. Girvan.

That's it. Yes, I know about Covered with Glory by Ron Craig, but that is a history of the 26th North Carolina at Gettysburg, rather than an overall reginental. (Have I forgotten any?) Out of seventy some odd regiments, home guard battalions, coast guards, prison guards, partisan rangers, Federals troops etc., we have ten modern histories.

I must say that things are looking a little better. I know of histories in the works on the 4th NCST, 33rd NCT, and 58th NCT (once again, the latter by yours truly). Would it not be a nice legacy to leave competent histories on all of our regiments?
Posted by Michael Hardy at 12:42 PM 1 comment: 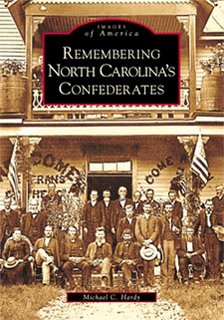 I am happy to report that Remembering North Carolina's Confederates is back in print. This book was released in September, sold out in four weeks, and the second printing was released a couple of days ago. Remembering North Carolina's Confederates is full of images of veterans reunions, monuments, monument dedications, veterans, and tombstones. If you are interested in acquiring a signed copy, please visit my store.

A special word of thanks to everyone who contributed photographs and information for this book. 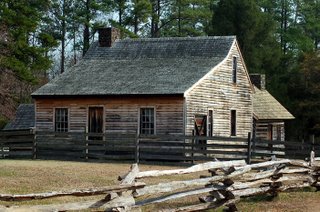 Last Wednesday I got to spend several hours at the Bennett Place in Durham doing a bit of research for an upcoming book. While talking to Kent McCoury, he mentioned that he had Maj. George W. F. Harperâ€™s rifle, the rifle that Harper carried during the battle of Bentonville. The rifle was an Enfield, (model 1853, made in 1862), and was donated by Harper to the state museum in 1912. Isn't that odd:an officer carrying a rifle during a battle.

This led me to think of other strange things that officers carried during a battle. Officers traditionally carried swords and pistols, weapons more of self defense rather than offensive weaponry. The thought behind this is that officers needed to be more concerned in commanding their troops rather than on the firing line. The sword was almost purely a decoration, or a sign of rank, rather than a weapon, even though there are instances of men being slashed with swords (usually cavalry). The pistol, with its short range, was clearly a last attempt at survival weapon.

So what other odd things did officers carry into battle? We have Harper with his rifle. Then there is the case of James G. Harris of the 7th North Carolina State Troops, who went into battle at Deep Bottom armed with a frying pan.

Anyone else have any tales of unusually armed Confederate officers?
Posted by Michael Hardy at 8:07 PM 2 comments: