David Parker and food's connection to morale in the Army of Northern Virginia.

I've been reading a lot of Confederate letter collections the past few weeks, and I have discovered something interesting in the letters of David Parker. Parker, from Yancey County and a member of the 54th North Carolina Troops, writes home about food (many soldiers did that), but ties in the morale of the army. We know that morale was tied to food, but it does not get mentioned very often.

In November 1862, Parker writes that all they are getting to eat is "dry crackers and beaf meat." He then confesses that he has lost weight in the past few months, and
concludes: " I don't think I can stand the scarcities much longer." (45) Parker became lucky in January 1863. He was detailed to cook for the officers in his company. "I get plenty to eat. Thank god that is one good consolation and that is more than any of the rest of the Privates can say," he wrote home in February. (62)

It is unclear just how long these arrangements lasted, but by late summer 1864, Parker appears to be back in the ranks. His command was in the Shenandoah Valley and while rations were scarce, there were opportunities to supplement with apples and other fruits just coming ripe. In December of 1864, things were not so good. Writing from the trenches around Petersburg, Parker believed that "It is the hardest time in this army that I have saw since I have been out in the service and if it does not get better the soldiers will not stand it long. They are all threatening to run away if they don't give them more to eat." A few days later he wrote that the rations were a little better. We are faring very well at this time though I do not know how long it will last. What we get now we can live on very well. If it will only continue. I have not thought to run away yet though when I wrote last I was very much tempted. If they had not given me more to eat I do not know what I should of done though I do not expect to run away while I can help it for it never was my notion to run away. You know that I all ways was opposed to it but hunger will make men do that they do not want to do. So long as Jefferson Davis does feed me as he is at this time I will stay with him." (136)

Of course, we know that the North cut off supplies coming from the Deep South, and from the Shenandoah Valley, and that thousands did run away. David Parker held out until the end. He was wounded, probably on April 2, 1865, and admitted to a hospital in Richmond the next day. Parker succumbed to his wounds on April 14, 1865; he is buried in Richmond, a long way from his home in the mountains of western North Carolina.

If you want to learn more of David Parker's story, check out Pen in Hand: David Parker Civil War Letters, edited by Riley Henry.
Posted by Michael Hardy at 9:00 AM 2 comments: 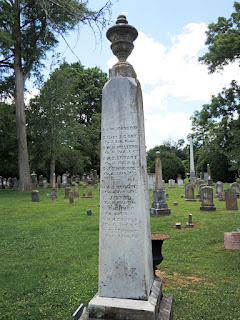 A few weeks ago, on my return from the living history in Maryland, we stopped by Lexington and spent a few moments with Stonewall Jackson. We also stumbled over to the Confederate monument in the cemetery, and found the names of several Tar Heels chiseled on it. That got me to thinking - who were these men and how did they wind up so far from the front lines of the War? (Yes, the war visited Lexington in June 1864.)

So, who were these men?

Below McKinney was G H B Huggins, Co.I, 2nd N. C. There are no Hugginses in Company I, but I did find a Henry B. Huggins in Company G. Huggins enlisted in Northampton County on July 18, 1861. He was wounded sometime around July 1, 1861, by the "explosion of a bomb shell at Camp Wyatt." Huggins was detailed as a nurse in Lexington on February 15, 1863, and died there of "typhoid pneumonia" on June 16, 1863. 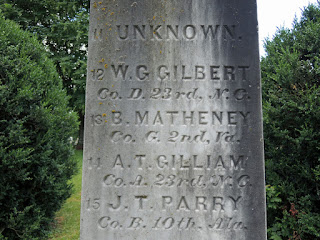 On another side of the monument were the names W. G. Gilbert and A. T. Gilliam, both listed as having served in the 23rd North Carolina. There was a Willis Gilbert in Company D. His records state he was born in Caldwell County and enlisted at the age of 28 in September 1862. He died at or near Lexington around February 6, 1863, of "chr[onic] gastritis."

A. T. Gilliam is proving a challenge. There are no A. T. Gilliams in Company A, 23rd North Carolina Infantry. I tried looking on Soldiers and Sailors for A. Gilliam, and T. Gilliam, but I could not identify this soldier. I also looked at the compiled service records for the 23rd NC, but I did not really see anything there that matched. It could be that the inscription is totally wrong, or maybe this poor lad died of some disease after he enlisted but before he was mustered into the regiment.

I did a little online searching , but I did not find a whole lot about a war-time hospital. The Stonewall Jackson house was used as a hospital, but it is unclear if this happened during the war. Maybe someone has that answer as well.


I wonder how many other Tar Heels are tucked away in places, seemingly forgotten.
Posted by Michael Hardy at 11:53 AM 1 comment: