Friends - these are all Confederate Veterans Reunion photographs from Watauga County. I am looking for better copies. Any help would be appreciated. Thanks! 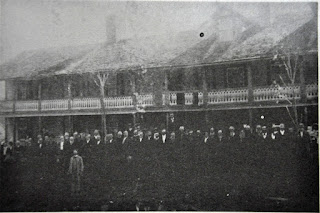 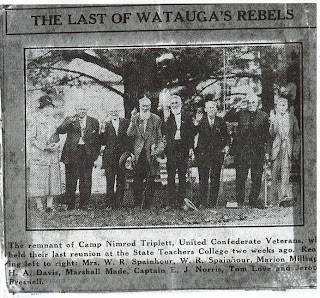 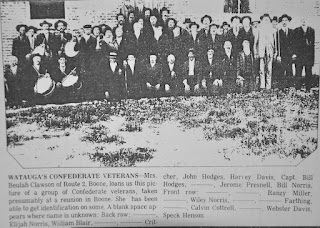 Posted by Michael Hardy at 10:31 AM No comments:

The first two weeks of this month were not that busy. That's going to change starting tomorrow. I look forward to seeing you around!

An Environmental History of Watauga County and the Civil War.

Ok, that is a very lofty title. The idea is based upon a project being developed by a couple of my friends from Appalachian State University. Of course, I am not working on an Environmental History of the War. I am just writing about the Watauga County and the War, and the shared experiences of the people who lived in the area in the 1860s.


But then again, it would be relevant to include more information about how the environment influenced the war within the confines of the county. That, however, is quite a challenge. The closest newspaper to the area would either be the newspapers in Salem or Statesville or Asheville.  If you have ever spent time in the High Country of North Carolina, the weather in Statesville is nothing like the weather in Boone. To go a step further, the weather one county away, say in Lenoir in Caldwell County, is often nothing like what it is on the west side of the Crest of the Blue Ridge Mountains.  Even the weather within a county is different. There are some portions of the county where snow accumulates to greater depth than in other parts. Or, to probably say it a little more scientifically, there are several different microclimates with the confines of one county.


My references are (as of right now) limited to these:


While none of these actually mentions Watauga County, there are several references to a drought to Ashe and Wilkes County in 1862. This was an event that affected at least much of the eastern US/CS - I've seen references to drought conditions as far away as Ohio in 1862.


There was a report of snow in the mountains of western North Carolina on October 25, 1862. (see Weekly Standard 5 November 1862.)


And, John Preston Arthur, in his history of Western North Carolina, writes that "there was frost in every month" in 1863.


So that is all that I have. I do not have a diary from Watauga County discussing daily life with regular notes about weather conditions . I do not have any letters from the home folks to the loved ones back at home.  And no newspaper. Not much to go on, for sure.
Posted by Michael Hardy at 12:10 PM No comments:


The Release of Nelson.


Tidings have reached this place of a raid on the part of some tories in East Tennessee into Watauga county in this State, and the abduction of several citizens of the county. The object in making this seizure is believed to be to hold persons taken as hostages for the safety of Nelson. As Nelson has been released, we presume the persons abducted will be set at liberty.
Posted by Michael Hardy at 11:39 AM 2 comments: