If you have spent much time on battlefields, then you are aware of witness trees, trees that were around during the battle and somehow survived not only the storm of shot and shell of battle, but also the blows of the lumberman's ax decades later. My personal favorite would be the Sycamore next to Burnside's Bridge on the Antietam battlefield.

Recently, I was standing in the heart of the University of North Carolina at Chapel Hill, right next


to Gerrard Hall, and the idea came to me: these are survivors, just like the Witness Trees. Surprisingly, there are not a lot of surviving homes from the area. Yes, we could probably put together a long list of several hundred, or maybe a thousand structures here in North Carolina, but really, that is a small number considering that the 1860 population of the state was just over 992,000. Say an average of six people lived in each house (a number I pulled out of thin air), that should give us around 165,000 homes.

Some of these buildings are state historic sites, like Stagville in Durham County, the Harper House on the Bentonville Battlefield, and the State Capital in Raleigh.

Others are local history museums, like the McElroy house in Burnsville, the Carson House in Old Fort, Fort Defiance near Lenoir, and Latta Plantation, near Charlotte.

And some are still private residences, places that are still making memories for the families who call them home and who take considerable time and expense to keep them up.

Over the years, I've had a chance to visit many of these places, sometimes as a simple guest, touring the house and grounds, and at other times, as a interpreter, trying to keep the history alive and passed on to future generations.
Posted by Michael Hardy at 10:45 AM 1 comment: 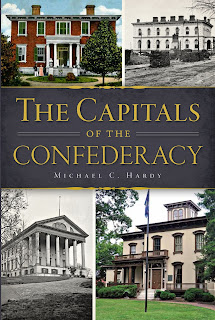 Winter break is over, folks, and it is time to hit the road. Please feel free to come out and join me at one of these events. I'll be talking about North Carolina as the last Confederate Capital.