Continuing the theme of interesting questions that arise during the Q&A, I thought we would spend a little time looking at the life of George Stoneman, the Federal cavalry commander who led the raid through western North Carolina in March and April 1865. Instead of a full biographical sketch, I thought we would cover a few points. 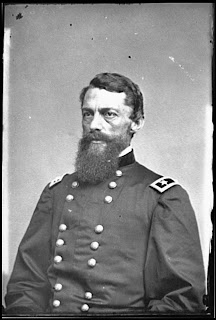 George Stoneman commanded the Federal cavalry during the battle of Chancellorsville. As part of Hooker's plan of battle, Stoneman was to lead the Federal Cavalry beyond Lee's lines, destroying vital railroad junctions, cutting Lee's supply lines and forcing the Army of Northern Virginia back. Rain first caused Stoneman's men difficulty, forcing him to recall part of his advance. Later the plan was changed by Hooker to be solely to destroy the railroads and lines of communication.  While Lee was concerned about Federal cavalry in his rear, he basically ignored Stoneman and, in the end, defeated Hooker and the Army of Northern Virginia. Hooker blamed Stoneman for the defeat. It only took the Confederates a few days to repair the damage. Stoneman was replaced as commander of the Federal cavalry corps in the Army of the Potomac before the month of May ended.

George Stoneman led another raid in Georgia in July and August 1864. Stoneman commanded one part of the cavalry of Sherman's army.  Sherman ordered the cavalry to break up the Macon and Western Railroad near Jonesboro. Stoneman proposed that after "destroying" Confederate cavalry in the area, he move to Macon, and then on to Andersonville, where he could free 23,000 Federal prisoners. The movement began on July 27. In Monticello, Stoneman learned that the bridges over the Ocmulgee did not exist, and chose to move on towards Macon, instead of turning back towards the west and linking up with other Federal forces. When he reached the outskirts of Macon, he found thousands of militia troops. Soon, Confederate cavalry closed in. On July 31, at Sunshine Church, Stoneman attempted to fight his way out. In the end, Stoneman surrendered his command. Stoneman was the highest ranking officer ever captured by the Confederates. He was exchanged in late September for Brigadier General Daniel C. Govan (captured during the battle of Jonesboro).

George Stoneman led a raid into North Carolina and Virginia in March and April 1865. After much delay, the raid began on March 20, 1865, moving through Morristown, Tennessee, on March 23, and skirmishing with home guardsmen in Boone on March 28. Instead of writing a blow-by-blow account, I would like to consider the question that has arisen more than once: what was Stoneman's directive? US Grant wrote to Stoneman's superior on January 31: "Stoneman might penetrate South Carolina well down towards Columbia, destroying the railroad and military resources of the country, thus visiting a portion of the state which will not be reached by Sherman's forces. He also might return to East Tennessee by way of Salisbury, N.C., this releasing some of our prisoners in rebel hands." Stoneman's goal was to destroy the railroad and "military resources" of the places that he went.

There you have it - three points that have come up in my discussion regarding George Stoneman.
Posted by Michael Hardy at 10:18 AM 1 comment:

Statesville: the Last North Carolina State Capital during the War

Continuing my "Stump the Historian" series today. Last week, I spoke at the Iredell County Public Library, and the claim of the Vance House as the last North Carolina Confederate capital was brought up. According to an early linen postcard, the Vance House was the "Former Capital of North Carolina During Vance's Occupancy." 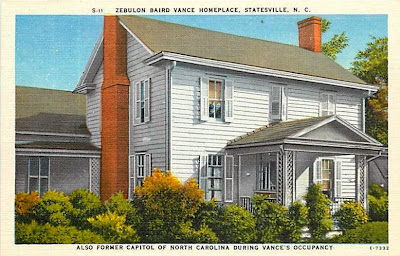 Hmm, the only problem with that claim is that Vance had already abdicated his position as governor before he got to Statesville.

On April 12, 1865, Vance left Raleigh, and by April 13, was meeting with Generals Johnston, Hampton, and Secretaries Regan and Breckinridge in Greensboro. Vance eventually went on to confer with Jefferson Davis in Charlotte, but returned to Greensboro and attempted to contact General Sherman. Sherman had already left North Carolina, and Vance had to deal with General John M. Schofield. Vance offered to surrender on April 27, but Schofield told him to go home. Vance issued a proclamation on April 28, calling for a return to social peace and an end to the strife caused by the war. It was his last official act. Instead of returning to Raleigh, Vance went to Statesville. He had sent his family to Statesville on the approach of Sherman towards Raleigh. When Stoneman approached the town, Vance's family fled to Lincolnton. Just when they returned, I have not found. Vance arrived in Statesville on May 4 and was in Statesville when he was arrested on May 13, 1865.

W. W. Holden, who was Vance's political rival, and who was appointed Governor of North Carolina by US President Andrew Johnson on May 29, 1865, firmly believed that once Vance left Raleigh, he relinquished his position as governor.

In looking through various biographies on Vance, I can find nothing that states that he attempted to conduct the business of the state from the house he rented in Statesville. He was only there for nine days before his arrest and transfer to the Old Capital Prison in Washington, D. C.

So, I would argue that Statesville did not serve as a capital of North Carolina. Thoughts?
Posted by Michael Hardy at 8:35 AM No comments:

On the Road in May.

It looks like things are going to calm down just a little over the next month. I have not quite as many places to go, but I am taking the Capitals of the Confederacy talk to different states. Not only will I be in North Carolina, but in Tennessee, South Carolina, and Florida as well. I look forward to meeting with folks and continuing the conversation!