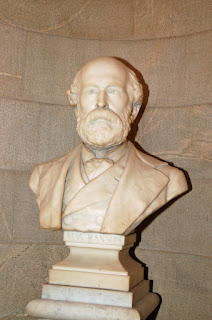 As many of you know, Matt Ransom was a North Carolina native (Warren County), UNC grad, Confederate general, and United State Senator (post war). During the War, he served as colonel of the 35th North Carolina Troops. He was wounded three times during the war. Born in 1826, he died in 1904.The North Carolina Historical Commission commissioned this bust, and it resides in the rotunda of the State Capitol building in Raleigh, North Carolina. It was dedicated on January 11, 1911.

Looking for NC's Civil War: the charge of the 58th and 60th at Resaca 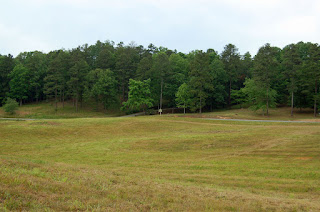 It had been a long winter for the men in the 58th and 60th North Carolina regiments in and around Dalton, Georgia. However, with Sherman's men poised just to their north, no one could really look forward to the spring campaigns. During the attacks on May 14 - 15, 1864, the 58th and 60th Regiments, a part of Reynolds' brigade, Stevenson's division, launched an attack across these fields, and pushed the Federals back. Sherman, however, soon moved a force further to the south, and Johnston was forced to abandon his position and fall back, keeping himself between Sherman and Atlanta.

Somewhere near this photo, possibly right where I was standing, is the ground that the 6th North Carolina State Troops charged over on July 21, 1861. Bee's brigade had been rushed to the field on the cars, and, according to Capt. Neill Ray after the war, as they neared the field, "we began to meet wounded men--we saw blood--the war was a reality... We were led on, avoiding exposed places so as to keep out of sight of the enemy, until we were brought up in front of what is known as the 'Henry House,' near which a battery was posted... It was but a short time... before these guns were silenced and captured." But in those few minutes Colonel Fisher and many others had been killed. The regiment had received its baptism of blood." 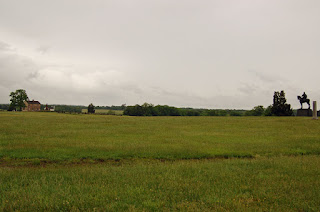 Since I am leading a discussion about the War and Macon County this afternoon (at the Hudson Library in Highlands), I thought maybe we would turn our attention to a survey about Macon County and the War.


Macon County was created in 1828, taken from Haywood County. It was named for Nathaniel Macon, a early North Carolina political leader in Washington. Franklin is the county seat.


When the secession crisis came in February 1861, locals were divided. Local men cast 250 votes for the convention, and 259 votes against calling the convention. Their one delegate was Conaro D. Smith. Born in 1813 in North Carolina, Smith grew up in Tennessee, and then returned to North Carolina, clerking for the firm of Smith and McElroy in Yancey County. Soon thereafter, Smith was licensed to preach, traveling the circuit in Georgia and Tennessee, before retiring to Macon County. He would go on to serve in the General Assembly in 1862. He died in January 1894.


Like many other mountain counties, Macon County's war was very personal. There were a couple of key events that did take place within the county. Thomas's Legion of Cherokee and white soldiers was created in Franklin in September 1862, and one of the last surrenders of Confederate forces in the east also took place in the town at Dixie Hall on May 12, 1865.


After the war, there was a United Confederate Veterans camp in Franklin (camp 955) and in 1909, a Confederate Monument was dedicated in the town of Franklin.
Posted by Michael Hardy at 9:22 AM No comments: 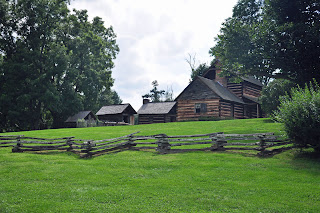 Zebulon Baird Vance is undoubtedly one of the most important North Carolinians of all time. From Buncombe County, he was educated at UNC (there was only one at the time), was a lawyer, served in the General Assembly, the United State House of Representatives, as colonel of the 26th North Carolina Troops, as governor of North Carolina, and as a United State Senator. Vance was born on Reams Creek, near Weaverville, northeast of the Asheville. The historic site contains reproduction cabins, along with numerous outbuildings, and a visitor center with museum.


I've been to the Vance Birthplace several times. This photograph was taken in August 2012.
Posted by Michael Hardy at 8:36 AM No comments: 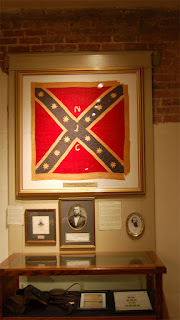 Flags held a special place of honor among many of the soldiers we study and write about. Many men gave their lives for these banners, and even today, are irreplaceable artifacts connected to the past. The North Carolina Museum of History in Raleigh has the third largest collection of Confederate flags in existence. However, the flag of the 1st North Carolina Cavalry, pictured here, is not one of them. This flag, and a small number like it, are held in private collections.


The 1st North Carolina Cavalry was organized on August 12, 1861, in Warren County. The first colonel was Robert Ransom, and the regiment served under the command of JEB Stuart. Actions included the Seven Days, Antietam, Brandy Station, the Wilderness, Reams Station, and Appomattox.


This photograph was taken in April 2011 at the Wilkes County Heritage Museum. The flag is no longer on display.
Posted by Michael Hardy at 8:19 AM No comments:

Looking for NC's Civil War: the Rowan Artillery at Gettysburg 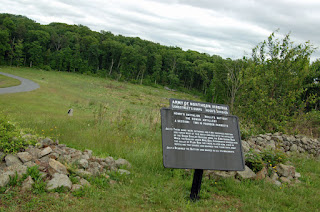 
I have visited this site numerous times, and I usually have these letters and read them as I sit here, imagining what took place. This photo was taken in May 2010.
Posted by Michael Hardy at 9:29 AM 1 comment:

Mention Alamance, and many people envision the pre-Revolutionary battle that pitted the Regulators against the militia of the governor (British). That in itself is a fascinating story. But the site also has a connection to our own civil war. In April 1865, as elements of Joseph E. Johnston's Army of Tennessee retreated west from Raleigh, the 3rd North Carolina Junior Reserves, under the command of Col. John Hinsdale, camped on the old battlefield.  A recent archeological dig produced artifacts from their brief stay, artifacts that are on display inside the visitor center.


Let me encourage you to visit the Alamance Battleground Historic Site. It is well worth your time. 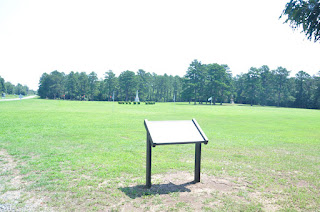 Posted by Michael Hardy at 8:09 AM No comments:

On the Road this Week

This is probably the busiest week I have on the schedule for this year. I hope you can join me at one of these events.


Saturday, August 11, 2012 - Zebulon Baird Vance Birthplace, Weaverville. - Western NC and the War. All day.
Posted by Michael Hardy at 8:43 AM No comments: 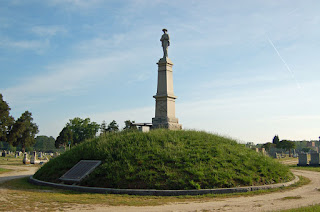 It seems that all of my posts last week have center around stones. This post will be no different. During the War, a Confederate hospital existed in Wilson, North Carolina. It was known as General Hospital No. 2. After the war was over, 101 men who had died in the hospital and were interred locally were removed to the Maplewood Cemetery. In 1902, the monument above was donated to mark their final resting spot. In 2003, two of North Carolina's Sons of Confederate Veterans Camps erected a plaque with the names of the men (mostly North Carolinians) who were interred at the site.

Have you been to Gettysburg lately? The town is always packed, and the visitor center crowded. Few places capture our attention like "the 'burg." We could spend a month blogging about nothing but North Carolina at Gettysburg, (and I might at some point). Of course, we could also do that with Antietam, Chancellorsville, or Chickamauga. 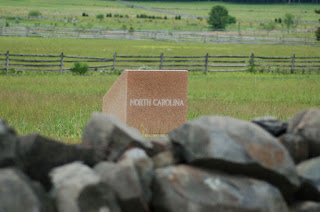 For those familiar with the field, this image needs little context. It is the marker for the spot attained by the 26th North Carolina Troops on July 3, 1863.  For those really familiar with the regiment, or the battle, then you know of the debate - about how this monument is in the wrong place, and should be a little further to the right of this photo.


Regardless, the story of the 26th NCT at Gettysburg should be one remembered by every Tar Heel.

On the road this week

Folks, I'll be on the radio this morning, Thursday, August 2, 2012 (WATA 1450 AM - Boone), talking about books, history, and this weekend's High Country Festival of the Book.


Tomorrow evening, I'll be speaking to the 47th NCT Troops Camp, SCV, in Wake Forest. They meet at Forks Cafeteria. Everyone is welcome!


On Saturday, I'll be speaking on a panel at the High Country Festival of the Book with Rod Gragg, Patrick Schroeder, and Johnnie Pearson. The panel is at 11:30 am.


I hope to see you out and about!
Posted by Michael Hardy at 6:02 AM No comments:

The War was a seemingly "off-site" event for the residents of the town of Boone. Oh, there were the parades and drills the opening days, and there were those who came back maimed, or a few deserters or escaped prisoners who were housed in the local jail, but that was pretty much the extent of the war for its first few years. That changed on March 28, 1865, when the lead element of a Federal column under George Stoneman rode into town and got into a brawl with local home guard. A few locals were killed and wounded in the fight. Twenty-four hours later, Stoneman was gone. Unfortunately for the people in Boone, the War returned when a brigade of home Yankees rode into Boone and set up camp. They were there to protect Stoneman's line of retreat should he need to fall back through the mountain passes. 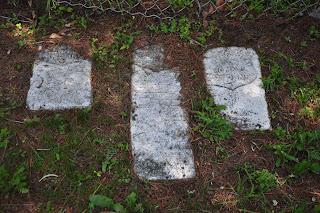 We will never know all that took place those weeks that the 2nd and 3rd North Carolina Mounted Infantry (US) occupied the town. We do know that three members of the 2nd North Carolina Mounted Infantry took sick while in Boone, died, and were buried, not within the confines of the main cemetery, but in its rear, were local slaves were interred. The Federals'  graves were eventually marked with stones from the VA. Regrettably, those stones have been moved, and now lie near the entrance to the cemetery, weathered and broken. Hopefully, they will be replaced soon with new stones, near the spot were they were once planted.