More on the Laurel War

Last week, I posted excerpts from a letter that appeared in the Semi-Weekly Standard on April 17, 1863, dealing with events between Shelton Laurel in Madison County, and Greenville, Tennessee. The yet-to-be identified author was complaining of the "independent thieves, robbers and tories of Laurel." He lays out several events that took place over a period of 12-months:

1. "They shot and killed one man in his own house, stole and killed horses, robbed the Southern citizens of guns, bacon, meal, clothes, and everything they could lay their hands on." In response, the militia was called out. Some of the loyalists turned themselves in, and others were captured. Some joined the Confederate army.

2. After this event, one of the leaders of the Shelton Laurel band "shot a man down for acting as a guide for some of the forces that were marched into that settlement."

3. Those that had enlisted in the Confederate army eventually deserted, "and brought off their guns and ammunition..." A Federal officer arrived and organized the men into a company.

4. The company then commenced "robbing and plundering private houses in a settlement called 'Flag Pond,' in Washington county, Tennessee, taking money, guns, clothes, meat, and everything they could carry away, making women and children strip off their shoes, socks and clothes..."

5. Then came the raid on Marshall, "where they not only took salt, but they broke open store houses and dwelling houses, and carried off every thing that they could take away."

6. That same night, they robbed the Farnsworth home of "beds, furniture, and clothes..."

A year later, a new article appeared in the Asheville News (June 30, 1864). It was signed "Marshall" and included details about other activities centered in and around Madison County.  The "citizens of this section have suffered enormously, within the last twelve months, at the hands of the 'Laurel Tories," writes the author. "Scarcely a week has passed that has not witnessed the robbery of some poor soldier's family, or the murder of a good soldier or citizen." Some were on the verge of starvation; others had chosen to pick up and move. Like "Elbert's" account, the report of  "Madison" goes on to lay out some individual events.

1.  "Old Bill Shelton" led the group into Washington County where they killed a "landlord and his son, robbed the family of everything valuable... even stripped the clothing from the backs of children...."

2. To combat the Shelton gang, J. A. Keith, former lieutenant colonel of the 64th North Carolina Troops, organized a group known as "Keith's Detail." [It will be remembered that Keith was forced out of the 64th NC after the Shelton Laurel event in January 1863.]

3. Keith's men, serving without pay, were able to kill "two of the worst men living... Russ Franklin and Wiley Gosnell."

4. Keith was also able to catch "Old Bill Shelton," whom they hanged.
The author adds at the end that he could "name various other important duties performed by 'Keith's Detail,' but this article is already too long." Maybe "Madison" wrote the newspaper again about local events. Unfortunately, copies of the Asheville News are sparse after this date.

I don't copy these items trying to justify the actions of Keith. I do draw attention to these events to illustrate this point: there is a whole other war going on in the mountains of western North Carolina and eastern Tennessee.  It is a conflict waged beyond the limits imposed by the Articles of War and later, the Lieber Code. It is a very personal war.
Posted by Michael Hardy at 11:09 PM 1 comment:

I've not been out much lately-- trying to finish the Branch-Lane book and talking with a publisher about a new project. I do have a few dates in the next few weeks where I will be on the road:

I hope to see you out and about!
Posted by Michael Hardy at 4:31 PM No comments:

In my last post, I copied a few lines from a scribe who simply signed his letter "ELBERT." Who was he? What interest did he have in the war going on in between Laurel Valley in Madison County and Flag Pond, then in Greene County? How was he trying to influence public opinion?

In the 19th century, authors were not required to sign their letters to newspapers. This might give an author an opportunity to be more honest, writing without fear of retaliation. One of the most famous cases in United States history of a newspaper correspondent not using his real name would be Benjamin Franklin's Silence Dogood letters. But while Franklin was simply adopting a persona that allowed him to express rather shocking and thought-provoking sentiments without getting personally involved, others had less lofty reasons for using pseudonyms; such anonymity could allow a person to libel someone else without fear of retaliation.  Since newspapers were not yet subject to legal punishment for such defamation, wronged parties might instead attack those they felt had impugned their characters.

After posting pieces of the article, I went back and looked for other letters from "ELBERT." Using newspapers.com, I found none.  I also looked through volume 2 of the papers of Zeb Vance, but I found none signed "ELBERT." Maybe one day we can find his identity.

There are, of course, some who would totally discount the claims that ELBERT made, that the citizens of Flag Pond and Shelton Laurel were truly innocent victims, and not also perpetrators in an ever-escalating cycle of crime and violence. A reading into the history of the area quickly shows that the Laurel Valley area was one of the most lawless communities during the war. To quote the editor of the Asheville New in May 1862: "To say that the late difficulties in Madison were 'more imaginary than real,' is to write down the authorities of the counties of Madison and Buncombe, with Gen. Erwin as their head, a set of asses."    While that editor could, himself, be just as biased as ELBERT, these accounts do add further complexity and layers to an ugly chapter of history.
Posted by Michael Hardy at 11:45 AM No comments:

Does this change your perspective on Shelton Laurel? 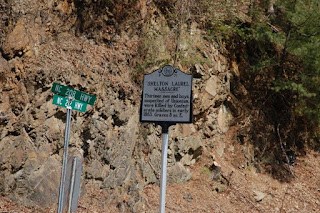 Recently, I found this piece, written in April 1863, about the Laurel War. Does it change your perspective? For a long time, the running story is that the bad Confederates kept the good Union people from getting salt. The good Union people raided the salt stores in Marshall one evening, breaking into a few stores and homes for good measure. The worst thing they did was to take blankets from the beds of sick children.  Soon thereafter, Confederate forces marched into Shelton Laurel, captured fifteen men and boys and marched them toward the Tennessee line. Before they had gone far, the Confederates lined them up and executed them. The youngest was 13. While there was some outcry, justice was never served on the Confederates. (This is the short version of the story.)

However, the piece below was written in April 1863 and appeared in a Raleigh newspapers:

"By this time [winter 1863], all who had volunteered from that country [Laurel], had deserted, and brought off their guns and ammunition, and commenced organizing companies, under the command, as they declared, of a Yankee officer, sent from Lincoln's government for that purpose. A company was raised of one hundred men, and they commenced robbing and plundering private houses in a settlement called "Flag Pond," in Washington county, Tennessee, taking money, guns, clothes, meat, and every thing they could carry away, making women and children strip off their shoes, socks and clothes for them, and left many families almost destitute of clothing, bedding or provisions. I did not learn that salt was the object of the thieves. Boys from ten to fifteen years of age were engaged in these robberies, and a gentlemen told me, whose house they robbed,        that they were the most active rogues in company. I did not hear of any salt  being taken.
The next depredation was committed at Marshal, Madison county, N.C., where they not             only took salt, but they broke open store houses and dwelling houses, and carried off everything that they could take away. They broke into A. E. Bair's dwelling house, a large, well-furnished boarding-house, and robbed it of all the blankets and other bed furniture. They also entered Col. L. M. Allen's dwelling house, and abused it at a great  rate-robbing it of all its furniture, and, I have heard made Mrs. Allen even strip off her under clothes, shoes and stockings for them to carry away. I did not hear that they got any salt there. On the same night, some distance from marshall, they entered A.           Farnsworth's house, robbed it of beds, furniture, and clothes, and emptied bed ticks of their contents, in order to pack their stolen goods in the ticks. I did not learn that those "independent, high minded" men packed any salt from there in the bed ticks." (Semi-Weekly Standard [Raleigh] April 17, 1863)


So, for a third time I ask, does this change your perspective on the supposed Shelton Laurel Massacre? There is so much more to this story.
Posted by Michael Hardy at 12:11 PM 4 comments: