Not that "hegemonic": Washington County, TN

Johnson City, Tennessee, is celebrating its 150th anniversary this year. There will be a wide variety of activities and events, and the Johnson City Press is coming out with some great articles! However, Brandon Paykamian's November 16 piece "Unionists in East Tennessee and beyond: the myth of Confederate hegemony in the South," disingenuously leads readers down a well-worn path that misses some very important steps. You can read the entire article here.

Paykamian asserts that "Confederate hegemony during the Civil War is a historical revisionist myth." Just when did this myth begin? Jefferson Davis certainly knew that not everyone living in the South was a part of one big, happy family. He engaged in spirited correspondence with North Carolina's Zebulon B. Vance regarding the habeas corpus actions of Chief Justice Richmond M. Pearson; the election of 1863 ushered in several peace candidates into the Confederate Congress; and the September 29, 1864, letter from South Carolina Representative William W. Boyce claimed the President had created a "centralized military despotism" over constitution, state, and individual. Those are just a few examples. That's not to say that the North was also united in its prosecution of the war. Lincoln suspended the writ of habeas corpus in the first days of the war, authorizing military commanders to arrest those suspected of disloyalty between Washington, D.C., and New York City. At one time, one third of the general assembly in Maryland was under arrest. Historians do not know exactly how many people Lincoln's administration arrested during the war, but estimates vary from just over 13,000 to as many as 38,000 people.  "Copperheads" in the North were, in some areas, quite numerous and outspoken in their opposition to the war and to the Union and, of course, draft riots like the famous New York violence speak to the complexity of the period.

The idea that there were those in the South who were not supportive of the Confederate cause was evident early on in the historiography of the time period. Edward Pollard, writing in The Lost Cause in 1867, mentions "a certain Union party in some of the States of the Confederacy," and then comes down hard Governor Brown of Georgia. Joseph Denny, Story of the Confederate States (1898) and Henry Eaton, History of the Southern Confederacy (1966) both make mention of Southern Unionists. (This conversation could go on and on.) While there are undoubtedly some writers who gloss over the discord throughout the South during the war years, everyone understands that the South was not uniform in its support of the Confederacy, just as Northerners were also complex and diverse.

Paykamian continues: "During the Civil War, Washington County was a Union stronghold, much like other regions of Central Appalachia, where plantations were few and far between in comparison to the rest of the state." Wait... he just wrote about the "the myth of Confederate hegemony." Are we going to now lump all plantation owners, i.e., slave owners, as a hegemonous group fighting against the Union? That's problematic because there was a sizable chunk of Southern slave owners who fought against the Confederacy. Andrew Johnson owned slaves, as did T. A. R. Nelson and David Bell. In Washington County, Thomas Reeves, Federal recruiter, owned slaves. In fact, of all those counties in far eastern Tennessee, Washington County contained the most slaves: 1,268.

As a sign of internal dissatisfaction with Confederate policy, Paykamian writes "In the same year of the conscription act, food riots broke out all over the south, when hordes of hungry rioters – some armed – ransacked stores and warehouses looking for anything to eat." Yes, food riots did break out, but not the same year that the Conscription Act was passed. It was passed in April 1862. The more famous food riots took place in Salisbury, North Carolina, in March 1863; Richmond, Virginia, in April 1863; and Burnsville, North Carolina, in April 1864. Despite much searching, I could find no food riots in Jonesborough or Washington County.


Posted by Michael Hardy at 6:46 PM No comments:

One of my favorite stories I have uncovered over the past 25 years of researching and writing has to do with the lowly pea. I used the story in both my first book, a history of the 37th North Carolina Troops, and in General Lee's Immortals, my history of the Branch-Lane brigade. The person who told the story was Pvt. David Dugger, Company E. He was from the mountains of western North Carolina. Being shelled by the Federals was a new experience for the Confederate soldiers below New Bern, where in March 1862, this story takes place. Dugger and another private had been sent to the rear to cook food for the men manning the front lines. 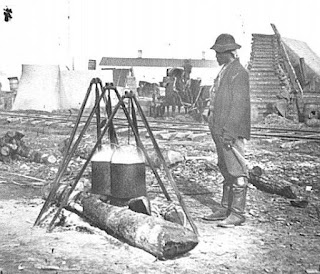 On the return [to the company] we had about a half dozen camp kettles full of peas.  The kettles were strung on a pole, with George [Lawrance] at one end and I at the other.  We had to go through a pine grove, and while going through there, we heard our first bomb shells, and we did not know what they were, and there we stood looking and wondering what on earth they could be as they went whizzing through the air.  Presently one cut the top out of a pine, and then we found out what they were and forthwith proceeded to hug the earth without getting our arms around it.  As soon as the sound of the shell died away we gathered our pole and started to the Fort.  When we got there we had peas all over us, so that we could hardly be told from the peas. (Watauga Democrat June 18, 1891)

Recently, I re-read Berry Benson's Civil War Book. This is one of those volumes I read decades ago, and I had forgotten that Benson had his own pea story. Benson's story comes at the end of the war. He's experienced "bomb shells" a plenty, but was captured, held prisoner, escaped, and just seen a good deal of the war. Benson and his comrades have evacuated the entrenchments around Petersburg, and are on their way to Appomattox Court House.

As I ran up the low hill, the shells bursting all around, I came upon a camp fire abandoned by its maker, and upon it sat boiling a pot full of peas. The fear of getting killed was strong, I admit, but hunger was a match for it. I saw Lieut. Hasell running by and called to him to come quick. Running the barrel of my gun through the handle of the pot, I gave him the butt, took the muzzle myself, and off we went amidst the crackling of the shells, bearing to a place of safety our pot of peas. But alas for human endeavor! When we finally reached a place where we could stop, we found the peas but half done, so turned the pot over to Owens to cook while we went on to the picket line with the Sharpshooters. When i next saw the pot... there was not a pea left to tell the tale." (197)

We here at Confederate History Headquarters had a discussion about what type of pea this might be. Several soldiers mention cow peas in their correspondence. These differ from the garden pea in that the cow pea could be dried more readily.  According to seed catalogs, a cow pea is also known as black-eyed pea, southern pea, yardlong bean, catjang, and crowder peas. There are several varieties of this staple food, which is more like a bean than a pea. The cow pea grows in "sandy soil" with low rainfall. Soldiers seemed to eat them by the bucket full any occasion they could get. Looking at Francis P. Porcher's Resources of the Southern Fields and Forest (1863), Porcher writes that "Great use is made of the varieties of the pea on the plantations... as articles of food for men and animals. The species called the cow-pea is most in use." (194) As I work on the Feeding the Army of Northern Virginia project, peas and cow peas are mentioned frequently. Only once, in the reminisces of Col. William Poague, has someone mentioned black-eyed peas. (150). It could be that different areas had different names for the same pea. Certainly, none of the black-eyed pea-eaters I know (myself included) use the name cow peas.

So the next time you set down to a meal with cow peas (or black-eyed peas), remember for a moment David Dugger and Barry Benson, and all the other Confederate soldiers who ate these peas! Happy New Year!

Posted by Michael Hardy at 11:25 AM No comments: