Earlier this week, I asked this question on my facebook page: who carried Robert E. Lee's headquarters flag? The short answer would be, after November 1862, it was a member of Company C, 39th Battalion Virginia Cavalry. So far, the name of the soldier(s) eludes me and my efforts to discover it.

The surviving headquarters flag of Robert E. Lee is probably the most famous. According to the research of the former Museum of the Confederacy (now the American Civil War Center), this flag was used by Lee from 1862  to 1863. It is unknown when he acquired this flag (believed to have been made by his wife), but we can assume it was after June 1862 when he was tapped to replace the wounded Joseph E. Johnston. He used this flag through the battle of Gettysburg. Sometime in late 1863 or early 1864, Lee replaced this headquarters flag with a Second National. At the end of the war, the Second National was cut up, instead of being surrendered. As an interesting aside, Lee's first headquarters flag was boxed up in the final days of the war and sent to Charlotte with other papers. It was found by a Government official and removed before the other papers and flags were turned over to the Federals.

Looking beyond R. E. Lee, there are the famous silk ANV-pattern flags made by the Cary sisters of Baltimore, Maryland, and presented to generals Joseph E. Johnston, Earl Van Dorn, and PGT Beauregard in the fall of 1861. Other Confederate generals who used traditional ANV battle flags as headquarters flags include Edmund Kirby Smith, Arnold Elzey, Fitzhugh Lee, and Joseph B. Kershaw. James H. Lane makes mention of surrendering his headquarters flag at Appomattox, but just what this flag looked like is unknown. The North Carolina Museum of History has the battle flag-style headquarters flags of Rufus Barringer and Bryan Grimes.

There were variants, of course (we are talking about Confederates, right?). Samuel French supposedly used a captured V Corps Headquarters flag for his own headquarters. William L. Jackson used a variant of a Second National.  Lawrence O. Branch used a First National. Dabney H. Maury had a flag with a white border, red field, white Christian cross, and stars.

Back to my original question: was there someone on staff whose job it was to carry the headquarters' flag? Maybe, but probably not.  In 1931, J. Churchill Cooke, 4th Virginia Cavalry, left us this reminiscence: "My company, the Hanover Troop, was an old organization in existence many years before the war... The company was composed of men from all parts of the county, many of them from that part of the county where several battles were fought. Before Jackson reached Mechanicsville, all of the men of my company were assigned to different generals as guides, scouts, and couriers. The captain of my company rode up to me with a flag and said: "Sergeant, as you are from the upper part of the county and don't know this part, I can't assign you to any of the generals, but here is Jackson's headquarters flag, which I shall give you to carry.' I took the flag and said I hoped I would not disgrace it. I reported to General Jackson as his flag bearer. He sent me word not to stay very close to him, only keep him in sight, which instructions I tried to comply with. I was with Jackson and in sight of him during the Seven Days." (Confederate Veteran Vol. 38, 248)

Company C, 39th Battalion Virginia Cavalry was assigned to Lee as his personal company of scouts, guides, and couriers. However, it appears that portions of the company rotated in and out every day. A detail of men would report for duty. It is my belief that if Lee needed to go someplace with his headquarters flag, a member of the day's detail was assigned to bear it. It would be feasible to say every member of the company might have carried one of those flags during the war.

Posted by Michael Hardy at 2:27 PM No comments:

When we think of refugees during the War years, Vicksburg always comes to mind. Residents in the besieged city were forced out of their homes, living in caves dug into the hillsides about the river town. The often told stories include civilians who lived on rats, dogs, cats, birds and mules, just trying to survive.

Yet the stories of refugees is far greater that just those told about the bluffs overlooking the Mississippi River in Vicksburg. The War produced hundreds of thousands of refugees across the South (an estimated 200,000 in Virginia alone). The could be found coming from small towns, like Winston, North Carolina, the first town burned by Federal troops (February 1862). Larger locations, like Atlanta and Columbia, were put to the torch, while other areas were shelled so extensively there civilian populations chose to flee. Charleston and Petersburg come to mind. 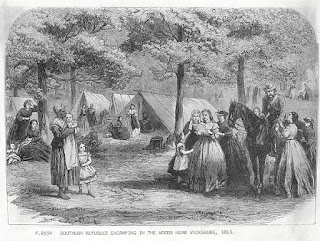 There were of course, the more famous Southern refugees, like Mary Chesnut, Varina Davis, and the family of Leonidas Polk. Refugees were not confined to women either: North Carolina governor Zebulon Baird Vance became a refugee at war's end. He fled to Statesville, living not far from the Confederate Senator from Tennessee, Landon Carter Haynes, who became a refugee much earlier.

The war touching places was not confined to these larger districts: it came to the rural areas as well. Arizona Houston recalled that when Kirk's raiders passed through the North Toe River Valley area of present-day Avery County, North Carolina, her mother was forced to relocate to her parents house after losing everything they owned. Col. John B. Palmer's (58th NC) home, and possible another residents, were burned during the same raid. The raiders took everything they had. In neighboring Yancey County, the home of Melchizedek Chandler was robbed and his wife threatened with hanging. When Chandler returned, he abandoned his home and moved closer to the relative safety of Burnsville. One county further west, in the Laurel community of Madison County, came the story of Confederate soldiers forcing some families into one single home, and then torching the others. 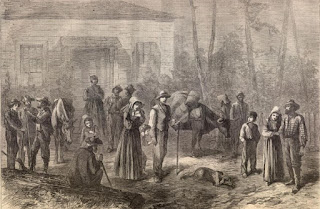 Technically, unless the former owners agreed to keep their former slaves on as hired hands at the end of the war, 3.6 million slaves became refugees, with no place to go, no house to live, no jobs, and with very limited (marketable) skills. There were Unionist displaced as well, like the families of Andrew Johnson, Horace Maynard, and William G. Brownlow. They were escorted from the Confederate controlled East Tennessee and sent packing up north.

What got me to thinking along these lines was a recent reading of Letters from Lee's Army, by Susan Leigh Blackford and Charles Minor Blackford. Blackford commanded a cavalry company early in the war, and then served as an assistant judge advocate on Longstreet's staff. While these letters are very edited (much like Mary Chesnut's Diary), they contain some fantastic description of life during the war. On July 11, 1864, Blackford writes from Petersburg: 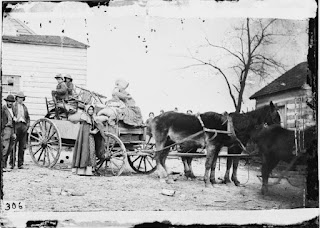 We are camped just outside of town... The whole country around here is filled with refugees from Petersburg in any kind of shelter, many in tents. Mr. Watkins is about a mile from here in a barn. His party consists of his wife and himself, Mrs. Hall, Miss Cary and all the children. They sleep on the barn floor.... Every yard for miles around here is filled with tents and little shelters made of pine boards, in which whole families are packed; many of these people [are] of some means and all of great respectability. There must be great suffering." (266)

Yael Sternhell argues that the massive amount of refugees the war created remade the South's social landscape. The War "challenged the laws and customs that governed movement in the antebellum years and subverted structures of power that determined which Southerners had the right to move at will and which did not." (Routes of War, 7) I would argue that scarcely any family in the South was not affected by the refugee crisis the war produced. They knew of people displaced by the war, took in people displaced by the war, or became refugees themselves. Those people that Blackford encounter living in tents, barns, and shanties outside of peoples in June 1864 were just a fraction of those dislodged during the 1860s.

Posted by Michael Hardy at 1:03 PM No comments: