On the field at Sharpsburg

Over three decades, this crazy life I live has taken me to some pretty remarkable places. The archives and libraries hold special treasures, but the fields themselves often hold the keys to whatever it is that I am writing. For years and years, I reenacted. There are still a few places, like Olustee in Florida, or Reseca, Georgia, where reenactors get to take the fields on the actual sites where the boys in Blue and Gray fought. A few years ago, I "retired" from reenacting. Yep - I hung up my sword. Instead, I became a volunteer interpreter. Instead of leading weekend warriors on some distant field, portraying for the masses what a Civil War battle might have looked like, I decided to get a little more personal. For several years, I (and my family) have volunteered at historical sites, trying to work closely with the public and interpret the events. And as a rule, we try to stay within two hours of our home here in the mountains of western North Carolina.

Every once in a while, some event comes along that pulls me out of the mountains. When the opportunity came to portray elements of Branch's brigade at Antietam, and to talk about the General on the very ridge where he died, well, it was an event too good to pass up. So my son and I loaded up and headed to Maryland. We were able to camp behind the Dunker Church (and even slept in the church Friday night due to the rain), march onto the field, fire vollies from the Sunken Road, and interact with the public in a very special way.

The highlight came on Saturday evening as I had a chance to stand by the cannon marking the site of Branch's death, which occurred on the evening of September 17, 1862. I had planned to speak on the life of General Branch, but my friend John Baucom read a brief biographical sketch of his life before it came to my turn. So just a couple of minutes before my turn came, I changed my talk, focusing on the men of the brigade as they came up from Harpers Ferry, the loss of Branch, James H. Lane's promotion, and the rest of their war. Some probably thought that it was all planned out. No, not really.  But 20 years of research into the Branch-Lane brigade can come in handy.


Camping on the ground where they fought, and marching over the fields where so many died, can give one a perspective very few others can get. It will be an event that I will always treasure, right up there with sleeping on Snodgrass Hill and in the Petersburg trenches. Three cheers for my friends in the 28th North Carolina Troops. It was a fantastic event!
Posted by Michael Hardy at 1:45 PM 3 comments:

Was it really Witcher's Cavalry?

In November 1863, a group of dissidents left Wilkes County, bound for Knoxville, and the 10th Tennessee Cavalry (US). As the story goes, the group of fifty-seven men were being piloted by Wilkes County resident John Bryant. They passed through Watauga County, and on into Tennessee. In an area of present-day Unicoi County (then Carter County) they stopped at the home of Dr. David Bell, for breakfast. As the waited under some trees, "rebels... suddenly came insight, and the alarm was instantly given. The poor fellows tried to save themselves by flight, being closely pursued by the rebels, who were shooting at them and charging on them with their horses at a terrible rate."

According to this account, written by Daniel Ellis in 1867 (he was not present), eleven did not escape. Those killed were: 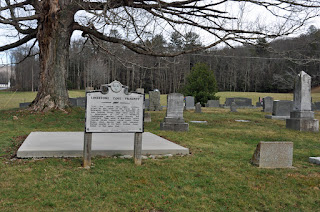 Ellis places the blame for the murder of these men on a Witcher, whose first name Ellis could not remember, but believed that it was either James or Samuel. Ellis wrote that Witcher came from Virginia, and had 400 men under his command. A whole host of later writers and historians believe that the man leading the attack was Col. Vincent A. Witcher, commander of the 34th Battalion, Virginia Cavalry, also known as Witcher's Battalion. There are, or course, many who dispute the claim that Vincent Witcher and his men were involved.

Vincent A. Witcher is an interesting soldier. He gained the praise of J.E.B. Stuart. The famed cavalry leader wrote a letter of recommendation for Witcher, on November 26, 1863, stating that he had witnessed Witcher's "personal gallantry and the good fighting qualities of his command. These were particularly exemplified at Gettysburg, at Hagerstown, Funkstown, and subsequently at Fleetwood in Culpeper." However, there was also a dubious side to Witcher's battalion. The Bristol Gazette reported in early 1864 the capture of a Yankee in Lee County accused of rape. It was the prayer of the editor of the Richmond Sentinel, commenting on the Gazette story, that the man "may fall into the hands of Colonel Witcher." Clearly, the battalion's reputation was a fearsome one.

Were Witcher and the 34th Battalion Virginia Cavalry even in the area of east Tennessee in the fall of 1863? On October 20, 1863, Maj. Gen. Samuel Jones wrote from Abington, Virginia: "Colonel Witcher had a spirited skirmish yesterday 2 miles south of Zollicoffer, with enemy's rear guard." (OR vol. 29, pt. 2, 796.) Zollicoffer was an earlier name for Bluff City. Two miles south would put the skirmish near Piney Flats, Tennessee, in Sullivan County. As the crow flies, that is about twenty miles from Limestone Cove, probably a day's ride through the mountains. Edward Guerrant, a Confederate staff officer who left behind a diary, also makes mention of Colonel Witcher arriving in camp three miles west of Blountville on October 27, 1863. (Bluegrass Confederates 358)

One newspaper in Knoxville republished an order that Witcher issued on November 23, 1863: "Headquarters 34th VA Bat. Cavalry... To all whom it may concern: "Notice is hereby given to the people of Carter and Johnson counties that the Union men will be held responsible, in person and property, for all plundering and bushwhacking of Southern soldiers and citizens. Whenever deserters, bushwhackers, and marauders, are known to assemble or whenever they may steal or plunder, the house and barns of Union men shall be burned to the ground. Citizens may appeal to, to organize and destroy the gangs of scoundrels who are infesting the country. The above order will be executed to the very letter. By order of Lt. Col. Witcher." (Brownlow's Knoxville Whig and Rebel Ventilator, August 19, 1864)

So, that places Witcher's battalion in the area.

Unfortunately, the trail runs cold at that point. There is a history of the 34th Battalion Virginia Cavalry, by Scott Cole (H. E. Howard, 1993), but it is silent on the matter.
Parson Brownlow, in his Brownlow's Knoxville Whig [Knoxville] April 16, 1864, published this account five months after the events took place: "Hundreds of men have actually been hanged and shot in upper East Tennessee by Longstreet's thieves and assassins... Witcher's company of cavalry, piloted by Nathaniel [Benson], of Washington county, took James Bell, the brother of Dr. Bell, of Greene county, forced him to lay his head on a chunk in the road and with stones and clubs they beat his brains out. They took some of the blood and brains and rubbed them under his wife's nose, cursing her, and telling her to smell them! They then burned the house down, and its contents with it, allowing her and her children to look on at the flames. The notorious Wesley Peoples and his brother, son of old Bill Peoples, were in this crowd."

Next, he makes mention of "Witcher's company of cavalry," not Witcher's battalion, which had several companies. That could simply be a mistake on Brownlow's part - I mean, there is a war going on and information is (probably) coming to him third or fourth parties. There is, however, another Witcher running around the mountains. James Witcher was forty-three years old when he enlisted June 13, 1863. Witcher was born in Virginia, but was living in Sullivan County, Tennessee. His command was known as the Zollicoffer Mounted Rifles, or the Sullivan County Reserves. We know next to nothing about the Sullivan County Reserves. It appears that there were six companies, and the Civil War Soldiers and Sailors database shows 343 men on the roster. James Witcher's folder in the Compiled Service Records from the National Archives contains just three cards. One is a muster and descriptive roll dated June 30, 1863, in Zollicoffer; the next states that he is present from June 13 to December 31, 1863; and the final card states James Witcher's name appears on a report dated Bristol, September 5, 1864. It is doubtful that Capt. James Witcher had 400 men with him, as claimed by Daniel Ellis.

In the end, it is really not clear just who attacked the party at Doctor Bell's home in November 1863, or even who was actually killed.

Maybe there are other documents out there. Maybe we should have a better book on the 34th Battalion Virginia Cavalry (Witcher's Battalion). Maybe we should do some research into the Sullivan County Reserves. Once again, I am confronted with a whole lot of questions, and very few answers.