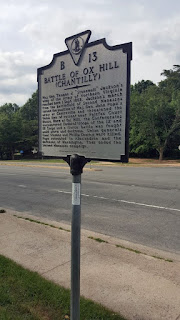 Over the years, I have had a chance to visit every battlefield where the Branch-Lane fought, walking the ground where they fought, save one: the battle of Ox Hill, or Chantilly. On a recent visit to Washington, D. C., I remedied that omission. I have checked that battlefield off my list and can say I've trod everywhere they fought, and marched, and camped.

So why have I not visited the Ox Hill battlefield? Well, there is really nothing left. We'll come back to that.

The battle of Ox Hill came at the end of the Second Manassas Campaign, and the beginning of the Maryland Campaign. Stonewall Jackson had swung around the flank and into the rear of the Federal army under John Pope. After capturing the Manassas Depot of August 27, Jackson fell back into a defensive position and waited for the Federals to attack. They did just that on August 29, and it was a hard fight for Jackson. Lee, with Longstreet's corps, came up later that day, and on August 30, attacked Pope's flank in the "largest, simultaneous mass assault of the war." The left flank of the Federals was crushed, and they started falling back towards Washington City. The battle of Second Manassas produced an estimated 22,000 casualties.

Even though they had borne the brunt of the fighting, Jackson 's corps was sent to follow up the attack. He hoped to cut off the Federal retreat and destroy Pope's army in detail. According to the National Park Service, by  "Making a wide flank march, Jackson hoped to cut off the Union retreat from Bull Run. On September 1, beyond Chantilly Plantation on the Little River Turnpike near Ox Hill, Jackson sent his divisions against two Union divisions under Kearny and Stevens. Confederate attacks were stopped by fierce fighting during a severe thunderstorm. Union generals Stevens and Kearny were both killed. Recognizing that his army was still in danger at Fairfax Courthouse, Maj. Gen. Pope ordered the retreat to continue to Washington. With Pope no longer a threat, Lee turned his army west and north to invade Maryland, initiating the Maryland Campaign and the battles of South Mountain and Antietam."
Branch's brigade was involved early on in the fighting. They were ordered to deploy (with Brockenbrough's brigade) about five that afternoon (September 1), and moved off to their right. Rain soon began to fall in torrents. Capt. James S. Harris, 7th North Carolina State Troops, wrote that the two brigades "scaled a high fence on the right of the road, advanced through an open field and body of woods to a fence near the foot of a hill where the battle was immediately joined. In front there was a meadow, and beyond that, a large field of standing corn which rendered the exact location of the enemy's line uncertain, until by the smoke of the battle and growing darkness, it could be outlined by the flashes of his guns.... Finding his ammunition was nearly out, Gen. Branch applied to Gen. Jackson for help, stating that his 'guns were wet,' to which Jackson curtly replied, 'tell Gen. Branch I have no troops to send him, the enemy's guns are wet, also, and if pressed he must hold his position with the bayonet.'" Of course, Branch did hold, and other troops came up. But the darkness and rain, after two hours of fighting, brought the battle of Ox Hill to an end. The Federals were to escape into the defensives of Washington. Lee, knowing he did not have enough men to lay siege or assault the Federal capital, and not really being able to supply his men so exposed, moved off toward Maryland.

So, why have I never visited the Ox Hill battlefield? Probably because only 4.8 acres (out of 300) are preserved as a park. The rest of the battle was lost to development in the 1980s. And it was a fight to have those 4.8 acres secured from development.  It was that second fight at Ox Hill that led to the founding of the Association for the Preservation of Civil War Sites. This group later merged with the American Battlefield Protection Foundation to become the Civil War Preservation Trust, then renamed the Civil War Trust, and more recently, the American Battlefield Trust. Over 50,000 acres of battlefield land has been preserved. I've been a member for probably 20 years, and I am a charter member of the American Battlefield Trust.
The position where Branch's brigade fought is in a condo development, probably along Sleepy Lake Drive. There is really not anything to see. But we were staying in Chantilly, and it was only a couple of miles away, on a late Saturday afternoon, and worth a visit to me so I could cross it off the list.


In preserving 50,000 acres of battlefield land, the American Battlefield Trust is doing an amazing thing. I don't always agree with them (Danville was not the last Confederate capital), but I am proud to be a member. Let me encourage you to check them out (click here).

Posted by Michael Hardy at 12:00 PM No comments: