Recently, I have acquired three new books that deal with North Carolina and the War. Let's take a brief look at the three.

The newest of the three is Pen in Hand: Davis Parker Civil War Letters, compiled by Riley Henry. According to his military record, Parker was living in McDowell County and enlisted in Yancey County on March 21, 1862. He was mustered in as a private in Company B, 54th North Carolina Troops. Parker was captured once, released, and wounded twice. The last wound occurred during the battle of Fort Steadman on March 25, 1865. He died in a hospital in Richmond on April 3, 1865. There are some 75 letters covering both military matters and even the mundane challenges of trying to manage a farm while stationed hundreds of miles away. These letters are transcribed, but are not edited. Even so, if you are into the day-to-day life of Confederate North Carolina soldiers, this is a great book.

The second book is edited by veteran author Bradley R. Foley. Letters Home: The Civil War Correspondence of Lieutenant Colonel Alexander C. McAlister, 46th North Carolina Troops. McAllister started the war as a lieutenant in Company I, 22nd North Carolina Troops. He transferred to Company F, 46th North Carolina Troops in March 1862, and was later promoted to lieutenant colonel of the regiment. He finished the war in North Carolina, trying to protect piedmont counties from Federal raiders. The letters begin in 1861, and end at the end of 1864. This very rich collection contains not only Colonel McAlister's letters, but his wife's letters as well. The letters are edited and contain illustrations as well. 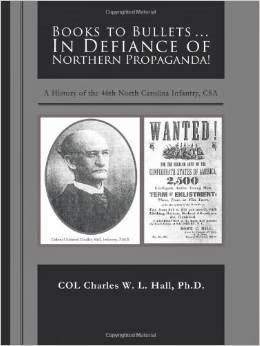 Finally, I received a copy of Books to Bulletts... In Defiance of Northern Propaganda! A History of the 46th North Carolina Infantry, CSA, by "COL Charles W. L. Hall, Ph.d" I am not quite sure what this book is supposed to be. A history of the 46th NCT it is not. Of 135 pages, 56 pages are taken up by a roster that could have fitted on five or six pages had it not been done in a table format. The roster only gives the soldier's name, company, rank in, and rank out. The rest of the book is largely made up of tables with a few Civil War Trust maps and copious quotations from the Official Records and Clark's. Hall lables himself as a  "Confederate Historian." He needs to learn how to research and write history and let the critics decide if he is really a historian.
Posted by Michael Hardy at 7:33 PM 4 comments:

The largest towns in North Carolina in 1860.

It always seems to surprise people, when I am out giving a talk, about how small Charlotte was in 1860. So, here is a list of the population of North Carolina towns in 1860, based upon the census. Things sure have changed.

While rooting around the other day, I came across the few lines below, reportedly delivered by Jefferson Davis from the front steps of the Bates House in Charlotte. The speech would have been given on April 18, 1865. The date of the article was May 20, 1896. I have read (but not looked for the actual piece) that there was an earlier version of this speech printed in a newspapers in Georgia, maybe just a couple of years after the war. If these claims are true, then would this not be the last speech of Jefferson Davis? Would not Charlotte be the place of that last speech?


"My friends, you greet me as cordially as if I brought you tidings of victory, while indeed I am the bearer of bad news. Gen. Lee has been forced to surrender--but the men live yet. The war has been for the people and by the people, and if they are firm and true there is hope. I thank you from my heart for this evidence of your confidence, and can say in reviewing my administration for the last four years, I am conscious of having committed errors and very great ones, but in all that I have done, in all that I have tried to do, I can lay my hand upon my heart and appeal to God that I have but one purpose to serve--but one mission to fulfill--the preservation of the true principles of constitutional freedom, which are as dear to me to-day as they were four years ago. I have nothing to abate or take back. If they were right then, they are right now and no misfortune to our arms can change right into wrong. Again I thank you."
Posted by Michael Hardy at 9:07 AM No comments:

My thoughts on Lee's Chapel.

Certain parts of the internet are all ablaze this morning on the news that the Confederate flags surrounding the statue of Robert E. Lee in Lee Chapel on the grounds of Washington and Lee University are going to be removed. This action comes as a result of a complaint of a group of six law students at the University. I guess the message of tolerance is lost on some people. 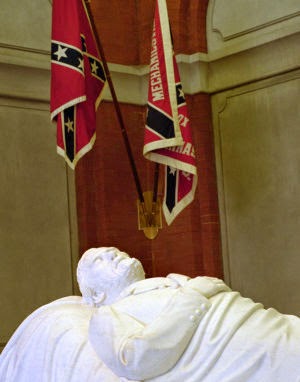 The last time I was in Lee Chapel, the reproduction flags were not in their holders, high above Edward Valentine's marble statue, but in holders on the floor. My guess was they were so place so they could quickly be moved for events when certain people might be "offended." I guess that's ok. But then again, it's not. I learned a long time ago that in life, I will be in places and situations in life that I find offensive. Do I raise a fuss? Do I cry out at the idiocy of some people? No. I had a better upbringing.

As a peace offering, the president of the University has stated that the reproduction flags will no longer be displayed. Instead, some of the flags that were originally on display in Lee Chapel will be returning, and will be on a rotating display. Hmm. This presents a problem for me. While I regret the decision of the school to remove all of the flags, and while I regret the cowering of the school administration to six minority students, to be able to see the original flags in a place where they were displayed for decades is something that I actually look forward to. Will they be hanging from their original  flag staffs? No. But still....

I have written before of my own story regarding one of those flags. In 1988, I visited Lee Chapel for the first time and saw the banner of the 37th North Carolina Troops, a flag captured on April 2, 1865, just outside Petersburg. Little did I know that my first book, released in 2003, would be about that same regiment. I've spent countless hours studying that flag - first at Pamplin Park, then at the North Carolina Museum of History, and finally at the Museum of the Confederacy's complex at Appomattox Court House. To have a chance to see the flag again near the statue of Lee would just be another piece of the journey that I am taking.

By the way, the Lee Chapel web page on the flags state that the flag picture, that of the 37th North Carolina, has "battle honors sewn into the fabric." That is not true. They are painted.

The web page also states that the first of the original flags scheduled to be displayed is that of the 26th North Carolina Troops, captured at Gettysburg, and still blood-stained.

Do I regret the decision of the school to remove the flags? Yes. Am I looking forward to seeing the flag of the 37th NCT back at Lee Chapel at some point in the future? Yes.
Posted by Michael Hardy at 9:49 AM No comments:

My work on the Branch-Lane brigade has been at a standstill the past few weeks. Between putting our house on the market and traveling to Florida with Nathaniel's science team, I've just been pressed for time. But now, it is time to get back at it.


I'm sitting at the beginning of the Maryland Campaign, and I've come to the conclusion that the 33rd NCT is my weakest link. I know less about this regiment than the other four. For example, at Hanover on May 27, 1862, after portions of the 33rd NCT captured the Federal field hospital at the Slaughter House, I honestly cannot say what they did for the next couple, maybe three hours. I do know they retreated, and eventually made their way to Ashland, but just what they did in the ensuing time is a mystery. Likewise, at the battle of Second Manassas, the 28th NCT and the 33rd NCT were ordered to support a Confederate battery on the far left of the Confederate line. The 28th NCT was recalled and redeployed, but what did the 33rd NCT do for the rest of the day? How far on the left were they and whom did they engage? They did suffer a few killed and wounded during the day, but nothing in comparison to the rest of the regiment.


and, a few newspaper accounts.


Just not much there to draw upon...
Posted by Michael Hardy at 10:29 AM No comments: