RALEIGH – Determination, commitment and pride are among many characteristics of North Carolinians depicted in the “Freedom, Sacrifice, Memory: Civil War Sesquicentennial Photography Exhibit” (www.nccivilwar150.com).The exhibit commemorates North Carolina’s role in the Civil War (1861-1865), a defining period in United States history.
The statewide traveling exhibit will visit the Nantahala Regional Library in June: at the Graham Library June 1-8, the Andrews Library June 9-15, the Murphy Library June 16-22 and the Moss Library in Hayesville June 23-29.
“The Civil War was the first war widely covered with photography,” explains Deputy Secretary Dr. Jeffrey Crow of the N.C. Department of Cultural Resources. “ The ‘Freedom, Sacrifice, Memory’ exhibit provides images of historic figures, artifacts, and documents that brought the reality of the war from the battlefront to the home front, then and now.”
Images gathered from the State Archives (www.archives.ncdcr.gov), the N.C. Museum of History (www.ncmuseumofhistory.org), and State Historic Sites (http://www.nchistoricsites.org) will illustrate valiant members of the Confederacy, African Americans fighting for freedom, and daring women dedicated to the South. A total of 24 images is being exhibited by the N.C. Department of Cultural Resources (www.ncdcr.gov) in 50 libraries throughout the state from April 2011 to spring 2013. A notebook accompanies the exhibit with further information and seeking viewer comments.
Among the photos will be an image of a rare dress from the Civil War period from the collection of the Museum of the Cape Fear in Fayetteville. The inscription written inside the bodice reads: “Janie W. Robeson/1864/calico $8 pr yd brought on blockade str from Nassau Bermuda [Bahama] island.” It tells that a blockade runner brought the fabric into North Carolina, which was purchased for a dress for Janie W. Robeson.
For information on the Nantahala tour call (828) 837-2025. For information on the exhibit visitwww.nccivilwar150.com or call (919) 807-7389.
Posted by Michael Hardy at 7:32 PM No comments: 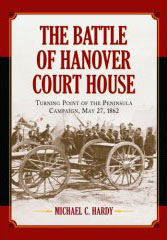 Friends, I've got a couple of engagements this week. Thursday evening, I will be speaking with friend Sharyn McCrumb at the Roanoke Public Library in Virginia. The subject will be the lives of Keith and Malinda Blalock. Everyone is invited.


On Sunday, May 27, I'll be at the Historic Hanover Tavern, in Hanover, Virginia, speaking about the May 27, 1862, battle of Hanover Court House. This will be followed by a tour led by Robert E. L. Krick. This is a ticketed event and you need to contact the Tavern for more information.
Posted by Michael Hardy at 6:50 PM No comments:


Wayside hospitals were established next to the railroads, and offered food, along with clean bandages or medicine to soldiers traveling home on furlough or back to the army. As of today, my "official" wayside hospital list is:


And then there comes a list of others - places that so far have not appeared on any list as being official general or wayside hospitals. This list included:


Maybe Raleigh was Wayside Hospital No. 4 in the above list. However, I've yet to find anything that says that in an official capacity.


By the way, the list above is the most complete list that I know of. It is built from period newspapers, and from a list that appeared in an article that was in the Confederate Medical and Surgical Journal  in 1864.
Posted by Michael Hardy at 3:28 PM 5 comments:

The free public program will begin at 10 a.m. in the Pleasants Family Assembly Room, Wilson Library, UNC. Registration will open at 9:30 a.m.

Wendell Wolka will deliver the keynote speech, "And the World Turned Upside Down: The Effect of the Civil War on the Paper Money of the United States both North and South." Wolka writes and teaches about numismatics. He is a governor of the American Numismatic Association and is governor and past president of the Society of Paper Money Collectors.

For more information, please see: http://www.lib.unc.edu/blogs/news/index.php/2012/05/civil-war-money-will-be-topic-of-june-2-program/
Posted by Michael Hardy at 9:35 AM No comments:

If you have not figured it out by now, I'll go ahead and let you in on a bit of my life: I really like cemeteries. I actually teach a class on cemetery iconography. Over the past twenty years, I've been in hundreds of cemeteries, from Florida, to Massachusetts, to Missouri. Very few things give me greater pleasure than setting stones for veterans, especially Civil War soldiers.


This past Saturday, I was honored to help set a stone on an unmarked grave of a Confederate soldier - one that I had been hunting for a long time. 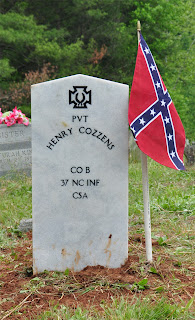 Henry Cozzens (Cousins) or at times, William Henry Cozzens, and his brother, Franklin Cozzens, both voluntarily enlisted in Watauga County in what became Company B, 37th North Carolina Troops, on September 14, 1861. Both were mustered in as privates. Both were from Randolph County. Henry was 21 and living at home; Franklin was 28 and married, with an infant daughter.  Franklin Cozzens was killed in action at the battle of Second Manassas on August 29, 1862, and lies buried in a mass grave.


Henry served most of the war as a teamster. He was captured on April 2, 1865, after the break through below Petersburg, Virginia. He was confined at Point Lookout and released after taking the Oath on June 10, 1865. After returning from the war, he moved southwest to Yancey County, where he married Alex Beaver King, the widow of a Confederate soldier. He eventually applied and was awarded a pension for his service in the Confederate army.


I've believed for many years that he was buried in the King Cemetery in Yancey County. A few months ago, after persistent questioning, we finally found a family member who confirmed this. A stone was ordered from the VA and placed on his previously unmarked (or fieldstone marked) grave.


But there is more to this story (something I've been researching for over a decade): Henry and Franklin Cozzens were "free persons of color."  They and their families are listed as either being negroes (1850) or mulatto (1860) on the Watauga County census. They considered themselves melungeons, or, of mixed blood, part Indian, part Portuguese, part Black. Regardless, they were not required (or even eligible) for Confederate service.  Yet they did serve, voluntarily. It cost Franklin his life. I've always wondered what happened to his widow after the War. She simply disappears. Oh well, the search goes on.
Posted by Michael Hardy at 8:53 PM 2 comments:

RALEIGH – Heroic tales and valiant feats are depicted in images that reflect North Carolina’s dedication to the war in the “Freedom, Sacrifice, Memory:Civil War Sesquicentennial Photography Exhibit” (www.nccivilwar150.com). Fontana Regional Library in Macon is hosting the exhibit through May 29, sharing images and stories that capture the history and people of the Civil War (1861-1865).


“The Civil War was the first war widely covered with photography. TheFreedom, Sacrifice, Memory exhibit provides images of historic figures, artifacts, and documents that brought the reality of the war from the battlefront to the home front, then and now,” explains Deputy Secretary Dr. Jeffrey Crow of the N. C. Department of Cultural Resources.


The exhibit will display 24 images from the State Archives (www.archives.ncdcr.gov), the N.C. Museum of History (www.ncmuseumofhistory.org) and State Historic Sites (www.nchistoricsites.org). Between April 2011 and May 2013, 50 libraries will showcase “Freedom, Sacrifice, Memory” offering visuals that present gallant women, African American triumph and the perseverance of Confederate soldiers. A notebook will accompany the exhibit with further information and seeking viewer comments.


One of the images is a photograph of Confederate spy Rose O’Neal Greenhow, who was an imprisoned along with her daughter. Greenhow was released after a few months, and later died after a blockade runner she was aboard ran aground. While attempting escape in a small rowboat that capsized, she was weighed down by gold she was attempting to smuggle to Southern forces and drown in the surf.


The unique exhibit will share the history from regions of North Carolina, including the western mountains, to educate viewers about the hardships North Carolinians faced during this pivotal time in United States history.


For information on the exhibit call (828) 488-2382. For tour information visitwww.nccivilwar150.com or call (919) 807-7389. The N.C. Museum of History, State Archives, and State Historic Sites are divisions of the N.C. Department of Cultural Resources.
Posted by Michael Hardy at 9:27 AM No comments:

Who was the "Spy"

A few days ago, I came across this tidbit in the Confederate State Medical and Surgical Journal (September 1864).  Anyone know who the "Spy" was? Maybe Gregory Spry?


Spy, private, Company "B," 10th North Carolina battalion of artillery. Patient strong and robust; has had five or six attacks of intermittent fever; quotidiana form; hour of expected chill, 11 o'clock, June 5th. At 6 A. M., 6 grains were given according to directions given the evening before. 7 A. M., pulse 64-6 grains given, and the same ordered at 8 and 9 o'clock. 10 A. M., pulse 85-very slight moisture on surface of body. 11 A. M., pulse 92--10 grains given, no moisture; patient complained that the chill was coming on. 11 1/2 A. M.; chill come on at 11.25 minutes, but slight. 12 M.; chill has passed off; fever succeeded; pulse 110. The fever lasted two and half hours, followed by the usual degree of diaphoresis. June 6th. Patient reports himself as "right smart better;" pulse 72. 6 A. M., 6 grains given, and the same ordered every hour, which had the effect of breaking the chill and fever; diaphoresis began at 10 o'clock. The patient returned to duty two days afterward.
Posted by Michael Hardy at 10:25 AM No comments:

As many of you know, I sent Civil War Charlotte: Last Capital of the Confederacy off to the publisher a few weeks ago. Last week, I received and finished the editorial proofs. Now I am just waiting for the galley proofs. Soon I will have a release date, and I'll start booking programs. I recently wrote a short article about Charlotte and the War for Battlefield Journal. Check it out if you are a subscriber. I'm also starting to work on a much longer article. Not much else to report right now, so stay tuned.
Posted by Michael Hardy at 9:28 AM No comments: