Lincoln had a what?

Have you ever been reading something and a word or two, or a sentence, kind of pops out at you? That was me a couple a days ago. I was reading Glenn LaFantasie's "The Paradox of the Gettysburg Address" in the Summer 2013 issue of Civil War Monitor. LaFantasie writes, in reference to the
Gettysburg Address, "None of Lincoln's other speeches--either as president or in his long political career leading up to the election of 1860--leaves more frustratingly inconsistent evidence than the Gettysburg Address." Lincoln had a long political career? I guess if you count when he first entered office, it was long, but not really. 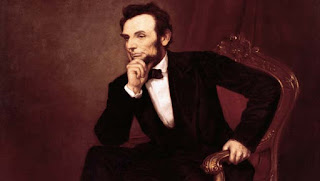 Ok, Lincoln's political career was longer than Washington's and Trump's, and about the same length's as Obama's, but he had not actually been elected to hold any state or national office since 1849. From 1834 to 1842, Lincoln had served in the Illinois House of Representatives, and from 1847 to 1849, in the United States House, but that was it. Ten years, eight of which on the state level. He actually had a longer list of political failures. Lincoln was defeated for the State Legislature in 1832, lost a bid to become speaker of the State House in 1838, lost a nomination for Congress in 1843, was not re-nominated in 1848, defeated for the US Senate in 1854, lost a nomination for Vice President in 1856, and was defeated again for the US Senate in 1858.

In my opinion, Lincoln was not a long serving political figure. He'd didn't have the experience to back up the job he got. Why else put someone like Simon Cameron in as Secretary of War (Lincoln didn't believe there would be a war - see new Cameron biography). After Lincoln fired George B. McClellan as general-in-chief, Lincoln formed a "War Board" to govern the movements of Federal armies. Lincoln later admitted he didn't have a clue as to what he was doing, and Henry Halleck was brought in as General-in-Chief in late July 1862.

I don't think Lincoln was a long-serving politician and I'll even go a little further: I believe Lincoln's lack of political experience really hurt the country and helped propel us into civil war. You might disagree with my assessment, and that is ok. That's just what my years of reading and research has led me to believe.

If you want to discuss something, how about this: what if Lincoln had failed to win the Republican nomination in May 1860? What if it had gone to Sen. William H. Seward, who won the first and second ballots? Had Seward won the nomination, would he have carried the election? Would South Carolina still vote to leave the Union?  These are questions we can never truly answer, but they are interesting to ponder!