This is the second part of a series on writing regimental/brigade histories, and this post is all about what you need to have in your "toolbox." Many writers have used this phrase in their discussions of the craft. When I teach writing workshops, I recommend people pick up a copy of Stephen King's On Writing. It is an autobiographical account of his writing life, along with steps and tools that he uses in crafting his books. And, On Writing is funny!


In the world of literary criticism, scholars spend a great deal of time studying about just whom an author reads. Why? Because what we read has a great deal of influence on the way we write and what we write about. When writing about a regiment, you need to have certain items in that toolbox; these tools will help you to understand the men themselves, and to some degree, how a regiment functioned. The first book on the list:


The Life of Johnny Reb: The Common Soldier of the Confederacy by Bell Irvin Wiley. Originally released in 1943, this book has not been supplanted by any other work. Different chapters cover the men in camp, in battle, religion, letters home, etc., etc. Back in my younger years, I read this book every year. I actually re-read it last year, prepping for Watauga County, North Carolina, in the Civil War. A regiment is composed of 100 officers and 900 common soldiers, hence the importance of the book. Wiley also wrote The Life of Billy Yank: The Common Soldier of the Union, which I also have, but I since I doubt that I will ever write a Union regimental history, we'll stick to the Confederate side. A runner-up to The Life of Johnny Reb would be Soldiers Blue and Gray by James I. Robertson.


Military Justice in the Confederate States Armies by Jack A. Bunch might come next on my list. Regiments contain many different facets. There are some good books out there that cover different parts of a regiment. A regiment was regulated by the Articles of War, a series of "military laws" that defined what was expected of a soldier and outlined how he was expected to act.  Bunch's book breaks down the background of military justice, charges, findings, sentencing, and punishments. Bunch published a supplemental volume, an index of men brought up on charges, and what their punishments were. As an aside, a copy of the Regulations for the Army of the Confederate States (1863) is really handy. This was the "bible" that governed day-to-day lives of regiments. This volume has been reproduced several times, so finding an original will not be necessary.


Rebel Watchdog: The Confederate States Army Provost Guard by Kenneth Radley is another piece of the puzzle closely related to Bunch's Military Justice. Radley's volume breaks down the role of the provost, writing about the origins of the provost and his duties, like dealing with passports, stragglers, prisoners, etc. While this book is not geared toward the individual regiment, having this type of material in your toolbox will help you better understand how the soldiers dealt with furloughs, straggling while on the march, etc.


Doctors in Gray: The Confederate Medical Service by H. H. Cunningham is an older book, but still the standard on the medical service (There is also a Doctors in Blue). This book will give you the basics on the medical department, not only on the battlefield, but in camp as well. Along these same lines would be books about hospitals. I would probably recommend Chimborazo: The Confederacy's Largest Hospital by Carol C. Green or maybe Richmond's Wartime Hospitals by Rebecca Barbour Calcutt.


The Story of the Soldiers Wouldn't Tell: Sex in the Civil War by Thomas Lowry deals with the seedier side of soldiering. You will find in some records mentions of soldiers with certain venereal diseases, especially when a regiment was stationed near to a large city. To my knowledge, this is the only book that deals with this topic in (graphic) detail.


Christ in the Camp by J. William Jones deals with those who strove to keep on the straight and narrow. While Christ in the Camp is an older book (1887), could use an index, and is probably not laid out the best, I still find it extremely useful and written by someone involved in trying to bring Christianity to the troops. There are several other books on the role of chaplains, several of which I have read, but none that really jumped out at me. For background, I might recommend God's Almost Chosen Peoples: A Religious History of the American Civil War, but, it is a dense read (I've still not finished it).


The Bloody Crucible of Courage: Fighting Methods and Combat Experience of the Civil War by Brent Nosworthy is just one book that covers fighting during the war. There are several other books in this same genre: Embattled Courage: The Experience of Combat in the American Civil War by General Linderman and Battle Tactics of the American Civil War by Paddy Griffin are two others that haunt my shelves. I personally like Bloody Crucible of Courage. While soldiers spent a great deal of time in camp, it really was the battlefield that defined them (in my opinion).

In the past couple of weeks, I have read Waters and Edmonds' history of the Florida brigade in the Army of Northern Virginia (A Small But Spartan Band) and James I. Robertson's The Stonewall Brigade. I must say that I found both of these books a little "light" in the research department. Neither book had any discussion of how a brigade functioned, of staff officers, or of armament. I understand that Confederate records can be sparse, but they are not that sparse. Last night, I started reading Hess's Lee's Tar Heels, a book I have owned a while, but don't recall ever reading it. I was impressed by what Hess wrote in the introduction:


"A unit history is a unique part of Civil War historiography... The ideal unit history should be complete and definitive, covering all aspects of its subject. Thus it is more than a mere recounting of that units battles; it should also describe the mobilization of manpower, the organization of the units, their acclimation to camp life, their initial combat experience, and the changing nature of the men's attitudes towards the war and the cause they fought to uphold. Ties to the home front, food, medical care, logistical support, political attitudes, social background, postwar life experiences, and many other topics ought to be covered as far as the available sources will allow."


In both of the regimentals that I have written, I've striven hard to make sure every one of those little pieces of the puzzle is portrayed within the text. I would add to Hess's list this: good maps and plentiful war-time images of the soldiers who fought in those regiments/brigades. In the books I wrote on the 37th NCT and 58th NCT, I went as far to include photographs of relics as well: flags carried, uniforms worn, gear carried, and in the case of the 37th NCT, their general and special order books. Added to this, post-war veteran reunion images, monuments the veterans helped erect, and an occasional tombstone of interest. If space allows, modern photos of places the regiment fought might be good. I did not do this in the 37th NCT book, but I added a photo or two of places in the 58th NCT book.


Up front, I can go ahead and say that there will not be any modern battlefield photos in the Branch-Lane book. I should have a surplus of war-time images from which to choose.


Since many people mention to me their own desires to write a regimental history from time to time, I think I will do a series of posts on "Unpacking your regimental toolbox." It should be a good exercise as I work on the Branch-Lane project.
Posted by Michael Hardy at 11:22 AM No comments:

Passing over the river...

Someone mentioned to me last night that we lost Michael W. Taylor a few weeks ago. Taylor, a lawyer who was living in Chapel Hill, was the author of To Drive the Enemy from Southern Soil: The Letters of Col. Francis Marion Parker and the History of the 30th Regiment North Carolina Troops (1998) and The Cry is War, War, War: The Civil War Correspondence of Lts. Burwell Thomas Cotton and George Job Huntley, 34th North Carolina Troops (1994). I don't recall having ever met Taylor, but we did correspond a few times.  You can see a short obit here.


I also learned a few weeks back that Dr. John G. Barrett passed away earlier this year. For some reason, I thought he was long gone. Barrett, whom I never met, penned the classic or standard study of North Carolina and the war, entitled The Civil War in North Carolina  (1963), along with North Carolina as a Civil War Battleground (1987), and with Buck Years, North Carolina Civil War Documentary (1980).  You can see a tribute here by one of his former students.


Barrett was obliviously the first modern scholar when it comes to North Carolina and the War, and many of us who pick up the pen today to continue the struggle of chronicling North Carolina's history rely heavily upon his work for background information.
Posted by Michael Hardy at 2:36 PM No comments:

Friends, we'll have a few more occasions to get together and talk about the War before my almost hibernation mode sets in for the winter. Here's my schedule:


December 6 - The History Museum of Burke County
Posted by Michael Hardy at 12:45 PM No comments:

I think I finally figured it out.

For years, people have asked my why I got into writing. Well, it surely isn't for the money.... Someone asked me the other day this very question, and I think I finally gave a good answer. I got into writing because I saw a need, a need to take all of these fragments of history from a hundred different sources and to put them together and tell a story. So often I say that this is their story (the people of the past), I'm just trying to get the people telling it into some type of context. 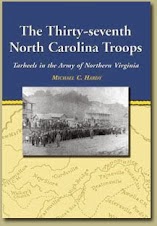 When I started working on the book on the 37th North Carolina Troops, which, by the way, came out ten years ago this year, there were what, two other modern regimental histories of Confederate regiments in North Carolina? (Those two would be the book on the 6th NCST and the book on the 11th NCT.) While there are now about a dozen modern North Carolina regimental histories, there is still a need. When I wrote that first nationally published article on Brig. Gen. Collet Leventhorpe, I saw a need. One afternoon, we were out on a ramble and stumbled across the general’s grave at the Chapel of Rest in Caldwell County. I wanted to know more about him. This new book on Watauga County and the Civil War is the same way. I saw a need.


So, as I embark on this new book venture on the Branch-Lane brigade, I am trying to fill a void - to get information from hundreds of different places, weave it together into a story, and get it into the hands of as many people as possible. It is just who I am.
Posted by Michael Hardy at 11:33 AM No comments: