I just want to let everyone know that I will be at the Todd General store in beautiful downtown Todd today, August 30, from 11 until 4. If you are in the vicinity of Ashe County, come on by and chat! I’ll be signing books, answering questions, and meeting folks. It’s a lovely day up this way, so I hope to see some of you there!
Posted by Michael Hardy at 10:37 AM No comments: 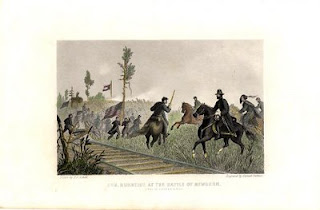 On a ramble around the internet today, I saw were work has begun on the visitor center for the New Bern battlefield. I was over in the area not long after I began blogging. The driving force behind the battlefield and the new visitor center is the local historical society. It is good to see local organizations working hard to preserve local history.

Just read a few minutes ago that a portion (small portion) of the Ox Hill or Chantilly, Virginia, battlefield will become a battlefield park. Apparently, the park will contain less than 5 acres – all that it left of the battlefield. Everything else has been paved over or built upon. There were two brigades of North Carolinians at this battle, fought just outside of Washington, D.C., on September 1, 1862: Branch’s brigade (7th, 18th, 28th, 33rd, and 37th NCTs) and Pender’s brigade (16th, 22nd, 34th, and 38th NCTs), along with the 21st NCT of Trimble’s brigade, and Latham’s Battery. The preserved spot is near where these brigades fought, but I believe that both of these position are now topped by houses.

As many of you know, I wrote a history of the 37th NCT. This is the only battlefield (of 30+) where they fougt that I have not visited.

If you want t learn more, check out the articles here, here, and here.
Posted by Michael Hardy at 9:17 AM No comments:

I just noticed that the NC State Archives has digitized and released the 1885 Confederate pension records. Check out the story here.

This was released on August 5 – why did I not notice it earlier? My 13th wedding anniversary was August 5!
Posted by Michael Hardy at 10:10 PM No comments:

back at work on the 58th NCT

Many of you will be happy to know that I spent most of yesterday working on the 58th NCT book. I've been away from the project for several weeks now, trying to complete the Mitchell County project. I spent yesterday reorganizing the piles of folders that I use to try and keep things organized. I also spent some time sending an email to a friend about the fragments of the 58th NCT's flag in Raleigh.

Whenever you undertake a project such a regimental history, there are always going to be questions that you cannot answer. It was true when I wrote the book on the 37th NCT, and it is turning out to be true for the 58th NCT.

What I want to know is how the "58" and "NC"of the 58th NCT's Atlanta/Dalton flag ended up with the Harpers in Lenoir? Was the flag surrendered at Greensboro, or was it smuggled out, or was it cut up in little pieces and distributed to the survivors? And, since the 54th and 63rd Virginia's 1864 issue flag survives, and the "58"and "NC"of the 58th NCT's flag survives, whatever happened to the 60th NCT's 1864 flag? Is there a list of flags surrendered at Greensboro?

If any of my readers ever attempt to undertake such a project as aregimental history, be prepared for a long list of questions that you will never find answers to!
Posted by Michael Hardy at 10:40 AM 1 comment:

Folks – I’ll be speaking in Boone this evening (Tuesday) at 7:00 pm at the Golden Corral. If you get a chance, stop by and join us.
Posted by Michael Hardy at 2:39 PM No comments:

This past Monday morning, I headed to Kinston to speak to a group of “cadets” at the School of the Ironclad Soldier. Kinston is almost six hours from my house, and I had to transverse almost the entire state on a Monday morning to get there. Thankfully, there were no mishaps along the way.

My favorite time of any talk that I give is the question and answer time. This event was no different, and I had a lovely eight-year -old peppering me with questions regarding what I had said. I almost thought I had been set up….

After my talk and looking at the exhibits at the visitor center, which has s 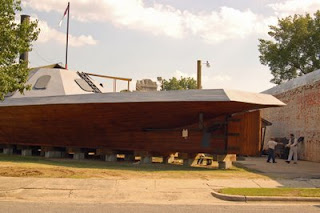 ome good relics from the area, I went over to tour the CSS Nuese II. The SCV/Reenactors/Community have gotten together and created a life-size reproduction of the Confederate ironclad. While the ship is still incomplete(no cannon) they are doing a great job of filling the inside of the vessel with items like bunks that the sailors slept on (documented), and an original steam boiler, much like the original that powered the ship. The tour guide was Charlie Broadway, who did a great job leading me around the ship. I had a great dinner, and I was taken to see the site of the Pickett hangings and the spot where the Unionists that Pickett hanged are buried. Then it was back to my room, where I finally finished Longacre’s dual biography on Johnston and Sherman (review coming).

On Tuesday, I stopped long enough in Raleigh to do some quick research, and then it was back home.
Posted by Michael Hardy at 8:30 PM 1 comment:

My first stop on my state-wide ramble was a in Hendersonville. On Sunday afternoon, there was a rededication of a marker commemorating the “Dixie Highway.” The Dixie Highway, according to Wikepedia, was created in 1914, with the goal of connecting the Midwest with the South. Rather than being one large road, the Dixie Highway “is better understood as a small network of interconnected paved roads. It was constructed and expanded from 1915 to 1927.” There were three routes. The western route ran between Chicago and Miami, through Nashville, Chattanooga, and Atlanta. The eastern route connected Sault Ste. Marie with Miami via Lexington, Knoxville, Chattanooga, and Atlanta. The central route “was a short cutoff between the western division at Macon and the eastern at Jacksonville, forming a shorter rout to Miami… The Carolina Division cut the distance between Knoxville and Waynesboro.” The route today is known as US 25. 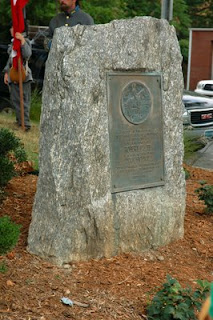 After attending the UDC-led re-dedication, we went inside to tour the recently opened Henderson County Heritage Museum, located in the old Henderson County Court House. Their inaugural exhibit is entitled “Let Freedom Ring” and features the story of Henderson County men and women who have served in the armed forces. Displays range through the days of the American Revolution to Desert Storm. Their Civil War displays are good, with some period pieces and a great map of battlefields and the names of those Henderson County men who lost their lives. The museum, which is free to the public, is well worth a stop.

Counting the Dixie Highway marker, I saw three Civil War markers on the courthouse grounds.
Posted by Michael Hardy at 1:52 PM No comments:

At home at last

Well, I̓m back from my wanderings, at least for now. I worked at our local museum on Saturday. On Sunday, I attended the rededication of the monument in Hendersonville and toured their museum. Monday afternoon, I spoke to some great folks at the School on the Ironclad Soldier in Kinston, and on Tuesday, I did a small bit of research at the state library and archives in Raleigh. Tonight, I am co-teaching (with my beautiful wife) a class on oral history at Caldwell Community College.

I̓'ll post more on my travels soon.
Posted by Michael Hardy at 10:57 AM No comments: 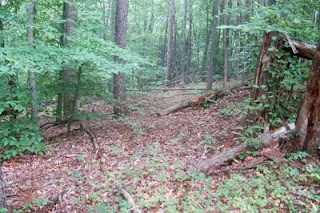 I'm back from my excursion to Cumberland Gap. I got to see some great Civil War related sites in Claiborn County, Tennessee, on Saturday –including some unmarked graves, a wartime church used as a hospital, the site of the battle of Tazwel, and plenty of other really interesting sites. Hats off to David Honeycutt for showing me around.

I went hoping to find the graves of a dozen members of the 58th North Carolina who died in September-November 1862 while on duty at the Gap. I was shown a site and told a story that the Confederates were buried here, and after the war were disinterred and taken to Chattanooga for reburial. Alas, I am not yet convinced. The depressions in the ground could have been burial trenches, but they might just as well have been the site of winter quarters/huts. I’ve read on other occasions of soldiers building log huts three or four feet high, and then excavating inside the huts another two or three feet so the occupants could stand up. And, why Chattanooga? Most of the Confederate dead in Chattanooga were later taken to Marietta. Why not Tazwell or Knoxville?

So, I am still on the lookout for the site of the Confederate cemetery in Cumberland Gap. Any ideas?
Posted by Michael Hardy at 11:33 AM 6 comments:

Greetings folks! Check out this link for information on Henerson County Heritage Museum's upcoming Civil War Days.
Posted by Michael Hardy at 8:49 AM No comments: I spent last Tuesday evening with some really good friends poring over the Bear Creek Baptist Church Cemetery in Mitchell County. There are probably 1,500 burials at Bear Creek, including about a dozen Union and Confederate soldiers.
I picked out two to talk about briefly. The first stone here is that of John P. Davis. He enlisted in Company C (not “D” as on the tombstone), 13th Tennessee Cavalry (US) on January 14, 1864. Just what became of him after that is unclear. He might have transferred to Company M, and then transferred to back to Company C, but that is unclear. At some point, over 50 years ago, someone ordered Davis a stone to denote his service in the Federal army.
The other tombstone (which was broken and lying in the grass) in the photograph is that of Matthew L. Sparks. On December 30, 1861, Sparks enlisted in the Mitchell Rangers, Palmer’s company that was charged with defending western North Carolina after the bridge burning in east Tennessee. Sparks was 49 years old when he enlisted. He served but two weeks – being discharged on January 14, 1862. The reason he was discharged is not listed, but I am willing to hazard a guess: his age.
So many times, when doing this type of survey, one runs across so many names with proper birth dates (1820-1850), but just cannot link them up with a soldier. In our survey we found a Adam Mace, born in 1847 and died in 1867, but we could not find an Adam Mace in Broadfoot or Soldiers and Sailors. There was also a Keith Sparks, born 1840, but we have found nothing for him either.
I’m off this weekend to Cumberland Gap. I’ve got a lead on a location for a Confederate Cemetery. Just maybe I can find a final resting spot for those dozen or so members of the 58th NCT who died between September and November 1862.
Posted by Michael Hardy at 6:55 AM 2 comments: