How about a few updates! 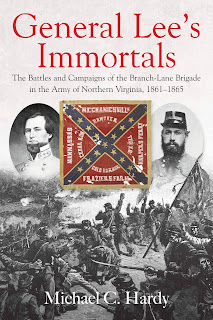 General's Lee's Immortals: The Battles and Campaigns of the Branch-Lane Brigade in the Army of Northern Virginia is set for release on December 3, 2017. I'm really looking forward to getting the proofs this summer. More details about ordering signed copies and maybe about scheduling a visit to your area, will come later this year. I am really looking forward to seeing this project in print. The story has been part of my life for over 20 years. 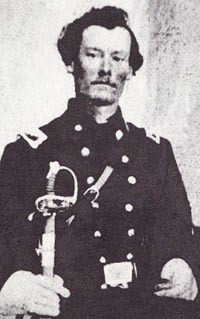 Kirk's War: The Civil War Along the North Carolina-Tennessee Border (proposed title) is what my winter (and now spring) project has been. It's been interesting diving into some local history and folklore, trying to capture the War as it raged across the border area. I hope to wrap up the battle of Red Banks next week and move on to 1865. This book is being published by the History Press.

And then there is project X - which I'm not talking about yet, but which concerns the Army of Northern Virginia. And lastly... earlier this year, I submitted a grant proposal to the North Caroliniana Society for assistance for a new project, one focusing on the life of North Carolina Chief Justice Richmond M. Pearson. It is my belief that he is the most influential North Carolinian of the 19th Century. The number of governors, US Congressmen, fellow judges, state representatives, etc., who studied at his Richmond Hill Law School is staggering.  The North Caroliniana Society awarded me the travel grant, and I'll be hitting the libraries this summer. This project will take a while to complete, as there is a wee-bit of a learning curve. Thankfully, I started reading law and researching the subject a year ago; I even have my own set of Blackstone's Commentaries.


Posted by Michael Hardy at 2:19 PM No comments:

Has Paul Cameron been lost to history?

Do you even know who Paul Cameron is? In 1860, he was considered the wealthiest man in North Carolina. He reportedly owned 30,000 acres, and up to 1,900  slaves. According to the 1860 census, his real estate was valued at $195,000, and his personnel property at $72,000 (which is probably low). He also had plantations in Alabama and Mississippi. Cameron was born in 1808 in Orange County  and inherited a considerable fortune. But he was not an idle aristocrat.  He attended the University of North Carolina and eventually graduated from Trinity College in Connecticut. Cameron studied law, but according to one bio, never practiced. He devoted himself to managing his plantations. He was also interested in railroads,  helping to promote the North Carolina Railroad, and was a director of the Raleigh and Gaston Railroad and the Augusta Air Line. He also owned considerable stock in two different banks, and in several textile miles. Cameron married Anne Ruffin in 1832. She was the daughter of Thomas Ruffin, chief justice of the North Carolina Supreme Court. Only once did Cameron run for office, serving in the North Carolina Senate in 1856 and 1857.

If you have ever visited Historic Stagville, near Durham, you might have heard of Cameron. It was the house in which he was born, and one of several that he later owned.

Recently, I visited Stagville for the second time. It was on a Friday afternoon, and according to the sign, we had just missed the last tour of the day. I had been to the site a year earlier, and the tours were running a little later, and had managed to catch the better part of that tour. On this trip, we had to content ourselves with looking over the displays in the visitor center and walking the grounds about the house.

In the visitor center, there was not one single mention of Paul Cameron. Now, having caught most of the tour last year, I know that he is mentioned there, as owner of the house, but every single exhibit in the visitor center was about his slaves. Now, don't get me wrong, slavery is an important part of our National story. Without slaves, who would have built out courthouses and universities, or provided the counties and states where their masters lived the money from taxes to take on these capital projects? Without slaves, who would have picked the cotton the fired the industrial revolution in the North? Without slaves, there would not have been the need for the massive amount of textile mills, who were turning out "negro cloth" in huge numbers to clothe the slaves in the South. Slavery is, unfortunately, a part of the history of us. And it needs to be interpreted and understood as a complex and many-faceted academic topic as well as a real human concern that affected the lives of real people with their own unique, often tragic, stories.

However, in my opinion, to totally expunge the story of Paul Cameron (and his ancestors) out the equation, is inexcusable. What were Cameron's contributions to the War? I see a brief mention of some of his slaves being conscripted to work on costal fortifications. And there is a mention of Federal forces raiding the Stagville (and others, I assume) for supplies towards the end of the war. Give us one board (with photos) tell us about his life, and the role of the community during the War years. Did Cameron sell foodstuffs to North Carolina or to the Confederate government? While Cameron himself did not serve (too old), and his sons were too young, how about other people in the community? Or, other members of his extended family? Did he have overseers who resigned and headed off to the war? I read someplace that Cameron was a Whig prior to the war. Did he even support secession and the Southern Confederacy? The Southern Historical Collection has the Cameron family papers. Surely somewhere in those 33,000 pieces are the answers to a few of those questions. The general public wants to know more.

PS: If you work at Stagville, it is usually common courtesy to break away from the computer and at least acknowledge visitors when they show up. Yes, it was about 3:30 on Friday. But, well, you never know who might walk through that door.   It might just be a family killing time between science fair competitions, or it might be an award-winning author and historian hoping to ask questions and learn more about your site. It our case, it was both, which you might have noticed if you had bothered to say hello or even make eye contact while we were in your visitor's center.
Posted by Michael Hardy at 1:10 PM No comments:

Richmond Pearson and the Twisted History of North Carolina in the Civil War. 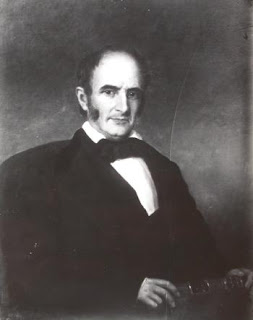 Friends - I'll be speaking at Lees-McRae College this Thursday evening, April 6, at 7:00 pm, in the Evans Auditorium. Topic is Richmond Pearson and the Twisted History of North Carolina in the Civil War.  Please come on out and join us! (Free!)
Posted by Michael Hardy at 8:51 PM No comments: