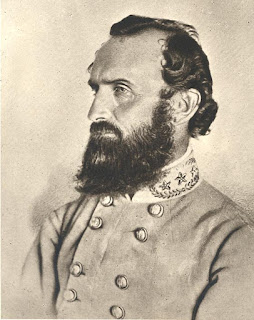 Have you ever been to Stonewall Jackson’s grave in Lexington, Virginia? Ever noticed all of the lemons near his headstone? Henry Kyd Douglas, an officer on Jackson’s staff, told us that lemons were Jackson’s favorite fruit, and could be seen during the battle of Gaines Mill sucking on one throughout the day. “Immediately a small piece was bitten out of it and slowly and unsparingly he began to extract its flavor and its juice. From that moment until darkness ended the battle, that lemon scarcely left his lips except to be used as a baton to emphasize an order..." Douglas wrote. (Douglas, I Rode with Stonewall, 103)  The Virginia Military Institute’s web page on Jackson states that there are two other accounts of Stonewall having a lemon on this day. That’s really not a lot to go on. Where did he get lemons from?
There are few accounts, beyond Douglas, of Jackson enjoying lemons. Probably the best way to secure them was to capture them from the enemy. A. J. Emerson wrote an article that appeared in Confederate Veteran in 1912 about Jackson sucking on lemons during the Shenandoah Valley campaign in March-April 1862. When someone asked about how Jackson acquired lemons, the answer was “from his commissary.” “Our commissary hasn’t any lemons” was the response. “Old Jack got ‘em from his other commissary.” “What other commissary?” “Banks. Yes, Old Jack draws all our rations from Banks.” Of course, “Banks” is Federal General Nathaniel Banks. The writer believed that Jackson captured Banks’ commissary wagons every couple of days, supplying himself, and his men, with provisions. (58)
Richard Taylor provides another post-war account in his Destruction and Reconstruction. Taylor, in 1862 near New Market, had his men in camp, and sought out Jackson. He found the general sitting on the top rail of a fence. “Just then my creoles started their band and a waltz. After a contemplative suck at a lemon, ‘Thoughtless fellows for serious work’ came forth [from Jackson]. I expressed a hope that the work would not be less well done because of the gayety. A return to the lemon gave me the opportunity to retire. Where Jackson got his lemons ‘no fellow could find out,’ but he was rarely without one.” (50)
In 1906, an old Veteran wrote to Harper’s Weekly “I remember a little incident that occurred at Harper’s Ferry when Stonewall captured the place. He was receiving a report upon the number of prisoners taken, when a soldier pushed forward, a crate filled with lemons in his arms, and presented them to the General. Jackson’s face beamed. “My man,” he said, smilingly, if you only joined yesterday, and if you don’t do another thing hereafter, you’ve rendered mighty good service in this war.” (1690) 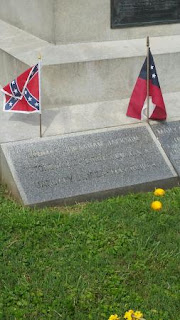 Of course, lemons were brought through the blockade throughout the war. On January 1, a store in Raleigh, North Carolina, advertised having 50 cases of lemons for sale. (Raleigh Register January 1, 1862). The Confectionary Store in Staunton advertised lemons for sale in March of that year. (Staunton Spectator March 11, 1862) Even as late as December 1865, the stores in Wilmington, North Carolina, advertised lemons for sale (The Wilmington herald December 30, 1865)
Getting lemons from the enemy was obviously a way to supply Jackson with the fruit. Heros von Borke wrote of Stuart’s capturing the smoldering ruins of the Federal depot at White Hall. Among the debris were cases of lemons. The Virginia Military Institute, on their Q&A page about Jackson, lists two other accounts, one from Colonel Raleigh Colston, and another from a cavalry trooper, maybe the trooper who even delivered the lemons from White Hall.
When it comes time to separate fact from fiction, we really only have one war-time account of Jackson and his lemons. That would be during the battle of Gaines Mill. Maybe in time some other war-time accounts will surface.

Posted by Michael Hardy at 3:49 PM