To my knowledge (limited, I know), there has only been one article ever written on Confederate War Department papers. Dallas D. Irvine wrote "The Fate of Confederate Archives: Executive Office" and it appeared in The American Historical Review in July 1939. Irvine talks a great deal about the Papers of Jefferson Davis and Robert E. Lee, but for the next few lines, I would like to focus on the papers other than those of the Executive Branch.

Irvine tells us that the papers of the State and War Departments were boxed up and sent away from Richmond. The State Department papers were sent away prior to the evacuation on April 2, 1865. William J. Bromwell, "disbursing clerk," was in charge. The papers were first taken to the Danville Female College, but Bromwell later loaded them back on the train and took the State Department papers to Charlotte. In Charlotte, "the containers were placed in packing crates marked with his [Bromwell's] initials and stored in the courthouse." Later, in fear of a Federal raid, they were removed to the "country" under the care of Mr. A. C. Williams" (826).  Bromwell wrote to Judah P. Benjamin on April 5, so I would assume they were in Charlotte and then the "country" by this date.

According to Irvine, the papers of the Quartermaster's Department were shipped to Lynchburg, Virginia. All 128 cases of them were captured there. Records of the Exchange Bureau were left in Richmond, along with the records of the Engineer Bureau and from the office of the chief paymaster. The War Department papers were hurried out of Richmond on the night of April 2, 1865, and taken to Charlotte. There were reportedly 81 crates of documents. When Jefferson Davis chose to leave the Queen City, the papers of the War Department were turned over Gen. Samuel Cooper.

Other papers from the War Department were destroyed, including the records of the Surgeon General, Commissary General, Signal Office, and Army intelligence Office. Other records still missing to this day include those of the Engineer Bureau, Ordnance Bureau, Niter and Mining Bureau, Office of Foreign Supplies, and Bureau of Indian Affairs. The Engineer Bureau papers were reported as abandoned in a railroad car in Greensboro. The ordnance records might have made it as far as Charlotte. It was reported that some records were destroyed at Fort Mill, South Carolina, possibly including the records of the Naval Department.

The State Department records mentioned above, according to Irvine, were retrieved by Bromwell after the war and brought to Washington, D.C., by Confederate colonel John T. Picket. Picket put the papers up for sale in 1868, and they were finally sold to the US Treasury Department in 1872. In 1906 and 1910, they were transferred to the Library of Congress.

An interesting paper trail for the War Department records can be found in the Official Records. After the surrender at the Bennett Place, Joseph E. Johnston made his way to Charlotte. Cooper notified Johnston of the papers, and on May 8, Johnston wrote from Charlotte to Maj. Gen. John Schofield: "It has just been reported to me that the archives of the War Department of the Confederate States are here. As they will furnish valuable materials for history, I am anxious for their preservation, and doubt not that you are too. For that object I am ready to deliver them to the officer you may direct to receive them." (OR 47, 3:443)

Schofield finally responded on May 12, writing from Raleigh. He informed Johnston that he was sending "Lieutenant Washburn, of my staff, to receive the War Department papers... I fully share your desire for their preservation, as they will be invaluable to history, and will take care that they be properly preserved for that purpose." (OR 47, 3:483).

When C. P. Washburne came calling on the evening of May 14, Johnston was out, but replied to Washburne's note that the documents had already been turned over to the local post commander. However, Johnston agreed to meet with Washburne the next morning. An observer noted that the papers were stored in a building on main street, "in a cellar-a dark, dismal spot... wagons were procured, and the boxes containing the documents conveyed to the railroad" and then taken to Raleigh. There were 83 boxes "of various sizes, from an ammunition box to a large clothing chest... They were also of all shapes. Some of them are rifle boxes, and many of them resemble the ordinary army mess chest."

Washburn wrote Col. W. M. Wherry on May 14 from Charlotte that he had the "rebel War Department documents" and would start for Raleigh at 7 o'clock the next morning (OR 47, 3:497). The papers were shipped via rail to Raleigh.

US Secretary of War Edwin Stanton wrote to Schofield on May 16: "Please turn over to Colonel Cutts, to be brought here immediately, all the rebel War Department papers and correspondence recently captured by you, and all papers or correspondence relating to the rebellion or the operations of the rebel Government in Richmond... Also give Colonel Cutts transportation and every facility to get here with the papers as speedily as possible" (OR 47, 3:510).  At the same time, Schofield writes to Henry Halleck: "I have all the archives of the late rebel War Department, including all the army muster-rolls, officers' reports, captured flags, &c. They amount to about two car-loads" (OR 47, 3:511). Halleck fired back on May 16: "Box up all captured Confederate papers, flags, &c., and send them to C. A. Dana, Assistant Secretary of War... Preserve every paper, however unimportant it may appear. We have the key to their ciphers. Important links of testimony have been discovered here of the Canadian plot." (OR 47, 3:511-12)

There were several notes passed between Stanton, Halleck, and Schofield on May 17. Halleck informed Stanton that the boxes, "weighing ten tons" would set out that evening. Stanton wanted the papers shipped via rail, but that was not to be. Schofield then prepared a manifest of what he was shipping: 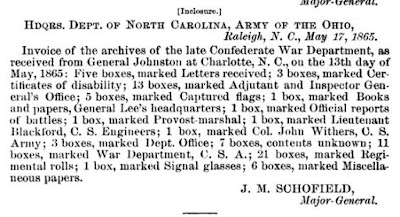 Halleck then notified Stanton that the papers "left Raleigh on the evening of the 17th." They were presumably shipped via rail to New Bern "or Beaufort," placed on the steamer John Tracy, and sent to Fort Monroe. Schofield sent a member of his staff, Colonel Treat, with the documents.  (OR 47, 3: 534)

Stanton was trying to connect Jefferson Davis with the assassination of Abraham Lincoln. The papers soon arrived in Washington, D.C., but the connection between Davis and John Wilkes Booth eluded not only Stanton, but also historians up until this day.

As always, this is fascinating information, Michael. We are thankful that these Union people took the time to safeguard them. And thank you for your valuable research!