Several people have asked, but no, I'm not going to either of the Gettysburg reenactments. Been there and done that - twice. I was at the 125th event in 1988, and the 135th event in 1998. The 1998 was the largest reenactment ever held - somewhere between 20,000 and 25,000 re-enactors. Since politics has dictated that we have two events this year, I seriously doubt we will eclipse the 1998 event. And, I swore after the Gettysburg event in 1998 that I would never go back for the event - too hot, too many people, too hot, and well, just too hot. To be very honest, the 2001 Manassas event ruined me - the heat index was around 115 degrees, and I've just not cared about any summer event outside the mountains since. 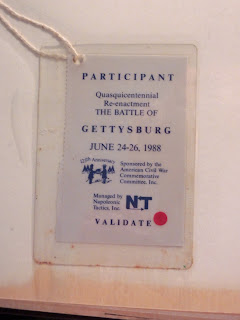 So, what I will I spend the next week doing? Tomorrow, the Hardy family will be volunteering our time at the Zeb Vance Birthplace State Historic Site near Weaverville. We'll be talking about Civil War music and ladies' clothing (particularly undergarments, ever popular). Probably Sunday, Monday, and Tuesday, I'll work on finishing up the Watauga County and the Civil War manuscript and getting if off to the publisher. I might be doing a program for the National Park Service next Friday evening at the Linville Falls Campground on the Blue Ridge Parkway, and on Saturday, I'll be talking about the War at the Newland centennial celebration here in Avery County.


Y'all enjoy Gettysburg. I skip the heat, ticks, $20+ bags of ice, traffic jams, and frequent thunderstorms. I'll just live in the past.... After all , there will be hordes of faceless folks at Gettysburg, but the Zeb Vance Birthplace really needs us and our friends to make their event happen. Sometimes, it is better to be where we are needed than at the "big (and did I mention hot?) show."


The photo? It is my registration badge from the 1988 event.
Posted by Michael Hardy at 5:07 PM No comments:

Is Watauga County's coverage the best in the state?

So as I concluded my work on Watauga County and the War, I have come up with one final question: is Watauga County the best-written about county in North Carolina when it comes to the War? The short answer, in my opinion is, yes... probably....  Here is why I think so.


Just about every regiment that had a large number of men to come from the county and serve, has some type of regimental history. On the Union side, we have:


On the Confederate side, we have:


Stuart's Tarheels: James B. Gordon and His North Carolina Cavalry in the Civil War. (2011) Hartley


The Fifty-eighth North Carolina Troops: Tar Heels in the Army of Tennessee. (2011) Hardy


And then there are a host of fictional accounts, like Sharyn McCumb's Ghost Riders  (2004) and Robert Greene's Haversack and Hog Rifle (1992).


Finally, there is my newest book, due out some time later this year, entitled, Watauga County and the Civil War (The History Press).


So - what do you think? Is Watauga County, Civil War speaking, the best written about County in North Carolina?
Posted by Michael Hardy at 7:43 PM 1 comment: