It was Scott, not Grant, who won the war.


The more deeply I read into Confederate history, the more convinced I am that it was Winfield Scott, not U.S. Grant, who actually “won” the War. Scott had a storied life. Born in Virginia in 1786; graduate of William & Mary, and then studied law; appointed to the U.S. Army in 1812; commander-in-chief in 1841; the acknowledged genius of the Mexican-American War; Whig nominee for president in 1852… (the list could go on). In the early days of the war, it was Scott who developed the Anaconda Plan.

If you have spent any time delving into the 1860s, you’ve probably seen reference to the Anaconda Plan. We usually see it mentioned, nod our heads, and move on. However, after working on “Feeding the Army of Northern Virginia” for the past couple of years, I’ve come to the conclusion that Scott’s plan really should get more attention. Regarding the Anaconda Plan, Bruce Catton writes that Scott knew it would take time to build armies. “[T]herefore, by blockading the sea coast, seal off the inland borders as well, then drive down the Mississippi, constricting the vitality out of the Confederacy—and, at last, send in armies of invasion to break the Southern nation into bits,” the Confederacy could be beaten. (29-30) Of course, a lot of people didn’t listen to Scott. They wanted quick action – on to Richmond was the cry. We know that didn’t work out very well. And after four years of Federal armies losing hundreds of thousands of men, the blockade finally strangled the Confederacy. When Fort Fisher fell, closing the Cape Fear River and the port at Wilmington, the Confederate armies quickly succumbed.

Now that’s not to say that Sherman’s operations in Georgia and the actions of Hunter and Sheridan in the Valley did not help contribute to the Confederate demise. They did, especially in regard to foodstuffs. But even before Sheridan moved down through the Shenandoah Valley, Lee’s army was dependent on food coming through the blockade, mostly through the port of Wilmington. That, and the illicit trade through Federal lines, is what really kept the Army of Northern Virginia going the last year of the war (That’s a whole ‘nother blog post). We could just as easily push this conversation back further. They were hungry after the first battle of Mannassas, and foodstuffs are what pushed Lee into Maryland in September 1862 and Pennsylvania in July 1863. 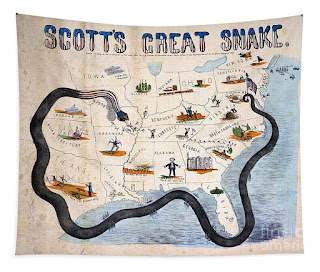 There will be some who will say that old Hardy is just succumbing to the Lost Cause mythology: that the South was defeated not through military might, but because the men were cold and hungry. I have come to believe that the latter is more true than some will want to believe. As I have worked on “Feeding the Army of Northern Virginia,” I have largely stayed away from post war-war reminiscences. Instead, I have focused on diaries and letters, creating a real-time look at problems of foodstuffs, at least in the army in Virginia. Based upon the trends, I can see when the soldiers were hungry, when they were well fed (which seldom happened), and how it affected their moral.  And that is really a key point. A huge percentage of soldiers, at least in the ANV, once they get to a breaking point regarding food, leave. Many head home. Some wander around trying to find or steal food. Others head to the Federal lines, where food has been promised to those who desert. In the end, Lee’s army, which had plenty of munitions of war, simply ran out of men.

But don’t take my word for it. Military historian John Keegan writes in The American Civil War that Scott’s plan was the “North’s fundamental strategy.” (321) Stephen Wise concludes the same in Lifeline of the Confederacy: “Defeat did not come from the lack of material: instead the Confederacy simply no long had the manpower to resist, and the nation collapsed.” (226)

In the end, Scott’s military legacy is overshadowed by Grant and Sherman. Scott was an old man at the start of the war, retiring early on, and passing away in 1866. Had the Federal navy been able to blockade the Southern ports more quickly, then maybe the Confederacy might not have existed as long as it did. It’s just something to consider, another thought to ponder in this complex story .

Posted by Michael C. Hardy at 9:58 AM No comments:

There are many different types of Confederate hospitals. A regiment in camp early on in the war would set up a hospital in a tent or local building. (Later in the war, at least in the ANV, these regimental/brigade hospitals were combined into a division hospital, at least in the ANV). Going into a battle, a brigade would establish a hospital for wounded well behind the lines. Like a camp hospital, a series of tents or structures, or both, would be utilized. Once the wounded were well enough to be moved, they were transferred to a large city-wide hospital complex. After these were organized, the wounded would pass through a receiving hospital before being transferred to a general hospital. Any large city (and probably quite a few towns) connected to a railroad could have a general hospital. If a sick or wounded soldier could go home, he was given a furlough and sent in that direction. Hospitals sprang up across the South to serve these soldiers. They would give the men food, possibly a change of bandages, and a place to wait while waiting for a connecting or refueling train.

To date, there has not been much published on Confederate Wayside Hospitals. In Glenna R. Schroeder-Lein’s The Encyclopedia of Civil War Medicine, we find a brief entry. Schroeder-Lein tells us that “Wayside hospitals were often initially developed and at least partially staffed by local women’s relief organizations…” In May 1863, the Confederate Congress passed a law directing the surgeon general to establish “way side” hospitals. Schroeder-Lein concludes that there were seventeen such hospitals in Virginia, with others in Georgia, South Carolina, Alabama, and Mississippi. (159) She probably dug that list out of an appendix in Cunningham’s Doctors in Gray. Cunningham does not say much about wayside hospitals. He does provide a list of hospitals, but surely that list is incomplete. There had to be more than two hospitals in Tennessee during the war, for example.

My first real encounter with a Wayside Hospital came while I was working on Civil War Charlotte. There were three different railroads that converged in Charlotte. Two of those, the Charlotte and South Carolina Railroad, which connected Charlotte to Columbia, and the North Carolina Railroad, which connected Charlotte to Salisbury, was a major route connecting the Deep South with the Upper South, especially after the loss of the line through East Tennessee in September 1863.

It is not clear when the ladies in Charlotte formed their wayside hospital. There is mention of the Hospital Association of Mecklenburg County in July 1861, but this looks to largely be concerned with a group of ladies who went to the Peninsula of Virginia to minister to the sick of the First North Carolina Volunteers. The first real mention comes in July 1862, following the Seven Days campaign, when Dr. R. K. Gregory was appointed “as surgeon of the Hospital at Charlotte, established by the citizens for the benefit of sick and wounded soldiers passing through or detained at this point.” (Charlotte Democrat July 15, 1862). In 1896, Miss Lily W. Long wrote an article published in the Charlotte Observer about this first hospital: “The first Hospital in Charlotte was established by the ladies in a large building used as the washhouse for the military institute, now the graded school. This building has since been removed. Here all arrangements were made for the care of passing soldiers. Every day two members of the hospital association went there with supplies of all necessary articles and gave their time and strengths to nursing and caring for our men. After a while the Confederate government took charge of the Wayside hospital, placed it under the care of the Medical department and used buildings of the Carolina Fair Association on what is now Middle Street, between Morehead and the railroad crossing, south….”

Richard Gregory, a Greensboro, North Carolina native and former US army doctor, was assigned as post doctor for both the General Hospital and Wayside Hospital in Charlotte. Gregory asked the ladies of Charlotte and the surrounding area to supply old sheets, pillow slips, counterpanes, and lint, along with "any delicacies, such as would gratify and be suitable for the sick and wounded" to be left in his office. It appears that women were active in the Wayside Hospital. At times, the Charlotte Daily Bulletin ran work assignments for the next few days. On November 26, Mrs. Sinclair and Mrs. Carson; Thursday, Mrs. C. C. Lee and Mrs. Capt. Lowe, and on Friday, Mrs. Overman and Miss Patsy Watson. On Monday, November 3, the duty fell to Mrs. Lucas and Mrs. Wilkes; Tuesday Mrs. C. Elma and Mrs. E. Britton; Thursday, Mrs. Coldiron and Mrs. John Howie; and, on Friday, Mrs. N. Johnston and Mrs. R. Surwell.

Jumping across the state, we have the Wayside Hospital in Weldon. Walter Clark, in volume four of North Carolina Troops, tells us the Wayside Hospitals were established in Weldon, Goldsboro, Tarboro, Raleigh, Salisbury, and Charlotte in the summer of 1862, and replaced by General Hospitals in September 1862. I don’t believe this is accurate, as Wayside and General hospitals are still listed as separate entities through 1864. (624) I don’t see, in Cunningham’s list, evidence of Weldon ever having a General Hospital. Regardless, there are some interesting tidbits about the hospital in Weldon found in Cornelia Spencer Edmondston’s diary   (I will confess here that I am extracting these from Toalson’s No Soap, No Pay, Diarrhea, Dysentery, & Desertion.). In February 1864, Edmondston writes of purchasing 38 dozen eggs from another local lady for the hospital. She is paying $1.00 a dozen. Twenty-five dollars has been donated, while her family covers the remining $13. (29) On March 20, Edmondston wrote: “Mr Wilkinson, the Agent of the Hospital, has been here for supplies. His trip was almost unsuccessful, for besides some Potatoes which Mr E had bought for him, some Lard which we could ill spare from the plantation but felt forced to sell him, & some Peas which Mr E gave him squeezed from the seed peas & the few household things I could contribute (very few indeed) & some eggs, 27 doz, which we bought from the negroes, he went back as he came. No one else had anything to spare, so swept is our country by Gov. Agents and Commissaries.” (71)

There is a lot to unpack in those two diary entries. People contributed money to support the Wayside Hospital in Weldon; items were purchased locally for the hospital; the hospital had a person who traveled around the area looking for supplies; and, government officers impressed a lot of the food in areas, making the local support of these hospitals difficult.

This post is just an introduction. Was there a Confederate Wayside Hospital in your community? Please feel free to share and maybe we can compile a more complete history of this piece of Confederate history.

Posted by Michael C. Hardy at 9:10 AM No comments: