In about a week, I need to submit the paper I am presenting at the Civil War Memory Symposium that is taking place in Raleigh in May at the Museum of History. The paper is on the process of remembering the War in western North Carolina, specifically on the monuments that were erected. So, last night I went to ASU to root out any additional materials from the different newspapers, and I came across a good mystery, which I might have already solved. But the mystery first.
For a long time, I’ve worked on a list of North Carolina-related Confederate monuments. The list is five pages and includes both monuments in the state and out of state. On this list, I have entries for five monuments or plaques in Asheville: one for Willie Hardy, one for Thomas L. Clingman, one for the 60th North Carolina, the large Vance obelisks, and one in the Newton Cemetery. I knew from previous research that the monument to the 60th NCT was dedicated on November 8, 1905.


Last night, I dug out the corresponding Asheville Citizen for the dedication of the monument for the 60th NCT. Not only did the citizens of Asheville erect and dedicate this monument on November 8, 1905, but they also dedicated monuments for Thomas L. Clingman and William B. Creasman. All three were located on the grounds of the Buncombe County Court House in Asheville.
The dedication of the monuments followed the usual routine. About 1,500 people gathered for the unveiling ceremony. The monument to the 60th NCT was draped in white, with eight ribbons hanging from the corners, which were held by eight little girls. As the crowd sang, “In the Sweet Bye and Bye,” the coverings were taken off. The monument to Clingman was unveiled by the UDC and Children of the Confederacy, and the monument to Creasman was unveiled by his descendants.
Due to the weather, the crowd was moved indoors to the courthouse. There, North Carolina governor Robert Glenn addressed the crowd, stating in his opening remarks that he “hoped the day would never come when his tongue would refuse to speak of that glorious cause for which my father died.” After the governor’s address, County Commissioner Locke Craig received the monuments on behalf of the county. At the conclusion, refreshments were served by the United Daughters of the Confederacy.
All three of the monuments were designed and manufactured by the Cherokee Marble Works. That being said, I believe all three would have been similar in construction. The monument to the 60th NCT still stands in downtown Asheville. You can see an image of it here. I believe that the monument to Clingman now resides over his grave in Riverside Cemetery. You can view that monument here. So what about the monument to Creasman? And, why did he have a monument? 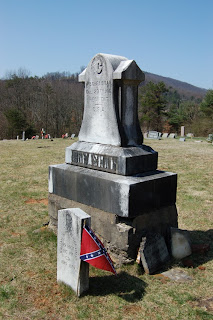 And, why is Creasman’s name on this marker, and why did he have his own monument? Creasman was born in Yancey County and lived in Yancey County at the start of the war. He did not move to Buncombe County until the war was over, and actually died in July 1869. By this I am perplexed.
Also, what happened to Creasman’s monument? Is the monument that stands on Creasman’s grave at Bethel Baptist Church in Buncombe County the monument that was placed on the courthouse grounds in Asheville? It does not seem to fit the same motif as the monuments to the 60th NCT and to Thomas L. Clingman. Furthermore, the newspaper article described Clingman’s monument as a “granite-based marble shaft ten feet high” while Creasman’s is described as a “marble block in ornament design.” Maybe this “block” resembled Governor Vance’s tombstone in Riverside Cemetery.

I found this on a genealogical web site, from Kevin White in 2000 (this is the original text, without corrections):


I dont know what accomplishment earned Col Creasman the monument, but i do recall the monument, which was a granite stone with brass plaques attached to both sides. It was located in the middle of Pack Square in the center of downtown Asheville, maybe 20 yards east of the still extant Pack Memorial obelisk. This was directly in front of the main entrance to Pack Library, where it was then located, and there were benches next to it. I used to wait there on those benches for my mom to pick me up from visits to the library, and i recall her telling me that the Col Creasman memorialized there was my ancestor.


As an adult i developed an interest in genealogy, and i went back to see this monument, only to find that it was gone. Sometime in the late 1970s, the Akzona Corporation (formerly American Enka) decided to relocate its corporate headquarters to Asheville, and built a new building (designed by I. M. Pei) on the north side of the square. The city took this opportunity to "renovate" the square, because among other incentives the city gave to Akzona to induce this relocation was the right to build underground parking under the square for their new building, in complete violation of the original grant from Pack to the City for the square for "public use". At that time the public restrooms ("white" and "colored") under the square had been closed for many years, but now all traces of them were removed, along with the monument to Gen Clingman and Col Creasman, and another monument placed on the square by the Daughters of the Confederacy honoring other persons. I am ashamed to admit how many years passed before i noticed this uprooting of monuments.


Once i was aware the monument was gone i attempted to find out what had happened to it. The Asheville City Parks and Recreation Department, at least at that time, had the responsibility of maintaining the square, and the head of that department since the early 1970s, now in honored retirement, was Ray Kisiah. I spoke to Mr Kisiah, who told me 1) no such monument had ever existed, and 2) the City wouldn't have removed it without first contacting those groups or parties who had placed the monument there. He suggested i contact the president of our local chapter of the Daughters of the Confederacy. This was about 1993, just before Mr Kisiah retired. I did as he suggested and called the president, whose name escapes me, and related to her the substance of Mr Kisiah's remarks, including his assertion that no monument would be removed without first contacting the groups who had placed the monument. She replied "Why, they certainly did NOT do so. If one of our members hadnt happened to be driving by as they were uprooting our monument we would have had no notice at all". It was only a few months before this conversation that the Daughters had succeeded in having their monument reset on the square, after about 15 years in storage somewhere.


But apparetnly, since no one who cared witnessed the City uprooting the monument to Gen Clingman and Col Creasman, the city was safely able to dispose of that monument, and now apparently officially maintains the stance that this monument was never there. Makes me proud to pay my taxes.

Col Creasman is still mentioned on a monument to all the confederate Colonels and Generals from Buncombe county, which is located just beside the courthouse, and is apparently too big and prominent to be safely sanitized.

What do you think? Is the rock at Bethel Baptist Church the monument the one that used to be on the lawn of the Court House in Buncombe County? Or is Creasman’s monument tucked away somewhere in a warehouse, right next to the Ark of the Covenant?
Posted by Michael C. Hardy at 2:19 PM