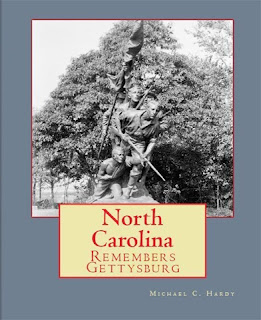 At times it is amazing how long bits and pieces of projects lie about before they come together to make a book or an article. Back when I started to go through material while working on my first book (37th NCT), I started to find some great information related to the battle of Gettysburg. I photocopied many of these items, stuck them in a folder, and filed it away. I do this with many of my future projects. A good example would be the article I wrote on “Dixie” that was in Civil War Times a couple of years ago. Every time I come across some soldier that mentions singing the song, I copy it and put it in the folder.
I’ve been collecting references to North Carolina and Gettysburg for almost 15 years. After finishing the project on the 58th North Carolina, I thought it might be a good time to get serious with the project. So I did. I started combing even more Tar Teel newspapers looking for mentions of Tar Heel soldiers and the battle. After collecting numerous first-hand reports, I looked them over and selected the best to include in a new book – North Carolina Remembers Gettysburg. This new work is being published by Ten Roads Publishing out of Gettysburg.

Yes, I’ll be honest up front – there are many stories from members of the 26th, 11th, and 6th regiments. Those folks seemed to write a great deal about their experiences during the battle. Of course, there are also other stories, from the 1st NC Cavalry, Reilly’s Battery, and the 37th NCT. All told, there are seventy-seven first person accounts, some written while the battle was going on, and others many years after the battle. I lightly edited the stories, trying to fill in whole names or at times, specific locations. But, this is their story, using their own words.


I often say the same thing about my other books, like the ones on the 37th NCT and 58th NCT – it is the soldiers’ story, using, as much as possible, their words. My job is to tell you what is going on around them.
Details about ordering North Carolina Remembers Gettysburg will be available soon – keep watching!
Posted by Michael C. Hardy at 2:06 PM