It is always good to read the brochure 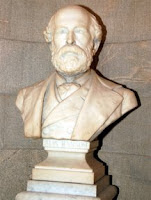 What would you learn about North Carolina and the War by visiting the capital(capitol) in Raleigh? Not much! Yes, they do give you a brochure that has some information about the War and about the reconstruction time period in it. But with so many visitors, they take the brochure and wander through the building without reading the text. There are very, very few interpretive markers within the granite walls. It seems that the few markers present are devoted to African-Americans. That is not to say that North Carolina’s African-American history is not important. Not at all. I would be the first to argue otherwise. I just hoped for more from our state capital.
The building itself is grand, albeit small. I personally enjoyed the re-creation of the state library, while my six-year old son enjoyed the recreation of the state geologist’s room. One of the displays discusses the damage to the west stair case. The display, complete with a wheel barrow, would leave you to believe that the damaged steps were caused by a slaves hauling wood in the wheel barrows up to the fireplaces in the house and senate chambers. It is only by reading the brochure that you learn an equally plausible reason: whiskey barrels for use by corrupt Federal officials. It seems that Gen. Milton S. Littlefield used the West Hall Committee Room as a makeshift bar while he was in Raleigh following the war.
If you actually read the brochure, which many people do not, you would also learn that:
most of the desks are original, meaning that they were in the building during the war; that one of the tables in the House was used to sign the Secession Ordinance of 1861 (the lower curved table); that Sherman’s troops "rifled the mineral collection" when they came through in 1865; that there was not a war-time underground escape route for the governor; and that the "secret rooms" above the offices in the House chamber were not for Confederate spies. Why we need Confederate spies in a largely Confederate dominated House is not explained.
If you get a chance, visit the state capital in Raleigh. The monuments on the grounds are impressive. The building itself is impressive. Everyone should visit at least once.
By the way, the above photograph is of a bust in the likeness of US Sen. (and Confederate general) Matt Ransom. He is found with three of our governors, and George Washington, in the Rotunda.
Posted by Michael C. Hardy at 10:34 PM