“The judicial power of the Confederate States shall be vested in one Supreme Court, and in such inferior courts as the Congress may, from time to time, ordain and establish. The judges, both of the Supreme and inferior courts, shall hold their offices during good behavior, and shall, at stated times, receive for their services a compensation which shall not be diminished during their continuance in office.” (Article III, Section 1).

The permanent Confederate constitution, like the United States Constitution, calls for the creation of a supreme court. The wording in the three sections dealing with the powers of the supreme court contains almost identical language. Yet the Confederacy never actually established a Supreme Court. The Provisional Confederate Congress passed a statute stating that the Supreme Court should temporarily consist of a quorum of all sitting Confederate district judges (Article III, section 1.) Yet on July 31, 1861, a law passed by the Provisional Confederate Congress stated the Supreme Court would not meet until properly organized. Writing in 1963, Charles R. Lee, Jr. noted that the reasoning behind this was due to the distance between the various districts.[1] 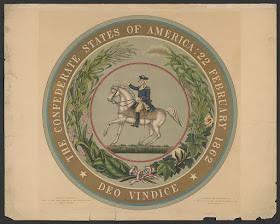 So what took place over those fifteen days that led to the indefinite postponement of the organization of the supreme court? That’s not really clear. Information on the Confederate Congress and Confederate Senators and Representatives is extremely poor. On September 26, 1862, Senator Benjamin Hill, Georgia, now chairman of the Judiciary Committee, introduced a bill to again organize a Supreme Court. Hill felt a Supreme Court was a necessity and alluded to a “Circuit Court Judge in Georgia [who] had decided against the constitutionality of the conscript law and was discharging conscripts.” Hill “feared that in the absence of the Supreme Court difficulties would arise for which there would be no remedy. The government, without this court was a lame and limping affair. The Supreme Court was as much demanded by the Constitution as the Congress or the President.” By a vote of 10 to 9, the Senate agreed to take up the vote.[5]

Again in January 1863, the discussion came up about the court. This time, the recorded debate adds to our knowledge of the thinking of the day. Semmes and Hill were in favor of the bill to establish the court. “We ought now to perfect the Government,” Semmes believed. Hill read from reports from the Attorney General and the Secretary of the Treasury “to show the urgent necessity of the organization of the court.” Senator Henry Burnett, Kentucky, was opposed, believing that the lack of a court had no negative impact on the population nor on foreign relations. Burnett was afraid that the establishment of a Supreme Court “would create sinecures for judges that he did not want.” Senator James Phelan, Mississippi, could see no need in the past two years, nor could he envision any cases within the next ten years, that would justify the need for a Supreme Court. For the next couple of days, the senators haggled over the number of justices, and salaries. Senator Louis Wigfall of Texas thought the bill unconstitutional, as it gave the Supreme Court power over the lower courts.[6]

The debate lasted into February. Senator Robert W. Barnwell, South Carolina, was opposed to certain aspects of the bill. “It was because the old Supreme Court, no doubt conscientiously, construed the law so as to cover up all the legislation of the country that the people of the North, educated in the belief of the indissolubility of the Government and the supremacy of the Supreme Court, felt themselves authorized to do what they are now attempting… It was a monstrous doctrine that the Supreme Court could have appellate jurisdiction over the State courts.” Senator Clement Clay introduced an amendment to repeal the review provision of the bill, which was approved 16-6. The Confederate Senate then approved the bill to establish the court, 14-8.[7] The bill went to the Confederate House, where it never passed. Thus failed the best attempt to pass a bill to establish a Confederate Supreme Court.

So what do scholars, the few who have addressed the issue, say in regards to the Confederate Supreme Court? Sidney Brummer argues that since the state courts tended to uphold most Confederate measures, there was not much of a need or pressure to create a Supreme Court.[8] William Robinson, Jr., tends to side with Brummer.[9] Charles E. George believes that had a Confederate Supreme Court been organized, the states would have ignored it, believing that the state supreme courts were indeed supreme.[10] However, David Currie contends that like the Federal government, the Confederate government needed a uniform interpretation of law. The Confederacy “similarly cried out for Supreme Court review of state court decisions respecting Confederate law.”[11] Wilfred Yearns believed that members of Congress were afraid of Jefferson Davis’s court picks. Alabama delegates were afraid the former US Associate Justice John A. Campbell would be appointed to the court. “enemies of the Davis administration feared that Davis would pack the Supreme Court with his ‘pets’ and particularly that Judah P. Benjamin would become Chief Justice,” Yearns wrote.[12]

All sides in the debate are probably correct. The Conscription Act and the suspension of the writ of Habitus Corpus would be prime examples. That is fodder for another blog post…

[2] The Messages and Papers of Jefferson Davis and the Confederacy, 1:192.

[8] “The Judicial Interpretation of the Confederate Constitution,” 133.